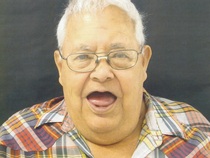 Albert Montoya passed away September 13, 2015 at 2:29 at the Powell Valley care center he was born in Pounds New Mexico, June 28, 1932 to Jesus and Aurelia Montoya. Albert came from a family of nine siblings to include himself. Albert was preceded in death by his daughter Gina, his parents and seven of his siblings. Albert married Ramona Pantoja in Cody Wyoming in 1986.Â
Albert is survived by his wife Ramona, his brother Dale Montoya, his children Debbie (Terry) Watson, Becky Montoya, Albert Montoya, Jr., Esther Idhen, Lucinda (Tim) Wirt, Walter Pantoja, Arnold (Lauren) Pantoja, Donna (Lyle) Sims, Manuel (Patty) Pantoja, Jim (Collette) Pantoja, his first grand-daughter Regina (Jonathan) Johnson and many more loving grand and great-grandchildren, all who will miss Albert dearly and cherish his memory.
We love you Husband, Daddy, Pops, Grandpa, till we meet again
Funeral Mass Services will be held Friday September 18, 2015 at 10:00am, at the St. Barbara's Catholic Church.
A Rosary will be held at 6:30 Thursday September 17, also at the Church.
A reception will be held immediately following the funeral at the Eagles Lodge 131 N. Clark St, Powell, Wy
To send flowers to the family in memory of Albert Benny Montoya, please visit our flower store.