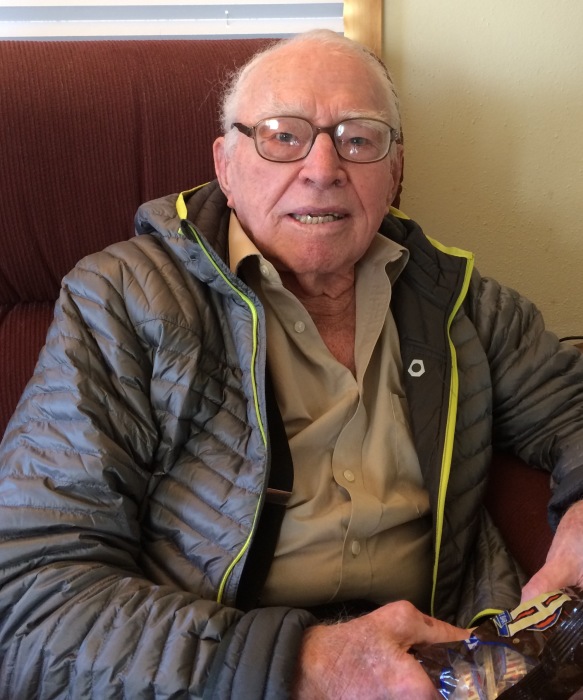 Alfred Fink, 93 died on September 29, 2017 at Powell Valley Care Center of natural causes.  Alfred was born to John D. and Emelia Fink in Kane, Wyoming on April 27, 1924.  He was eighth of ten children.  Al’s Family moved to Lovell when he was young and after graduation, he enrolled at the University of Wyoming.  He met Marie Dourlet at college and stayed in contact with her while serving in World War II.  Alfred served in the U.S. Army in New Guinea.  After returning from the South Pacific, he married Marie in 1946.  Al and Marie moved to Worland, Wyoming where their daughter, Meela was born in 1948.  Alfred worked as a lineman for Pacific Power and Light and Marie was a homemaker.  Al took early retirement after working for PP&L for 37 years.  Alfred moved to Powell, Wyoming in 2010 to be closer to family.  Alfred enjoyed spending time with his family.  He enjoyed making cookies, reading and needlepoint art.  He was a lifelong member of the Missouri Synod Lutheran Church.  During his life Alfred was a member of St. John’s (Lovell), St. Luke’s (Worland), and was a current member of Emmanuel Lutheran Church in Powell, Wyoming.

He was preceded in death by his parents, wife Marie Fink, son-in-law- Charles Tharp. His brothers and sisters: John, Carl, Gottlieb, Sol, Daniel, William, Emile, Marie and Bertha.  Graveside services will be held at Riverview Memorial Garden in Worland, Wyoming on Wednesday, October 4, 2017 at 1:00.

To send flowers to the family in memory of Alfred Fink, please visit our flower store.
Send a Sympathy Card