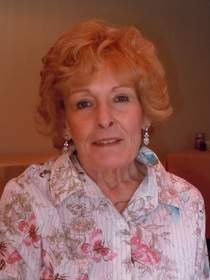 After a long fight with chronic obstructive pulmonary disease (COPD), Alice Faye Johnson passed away with her daughter at her side in the early morning on Friday, February 20th, at Billings Health and Rehabilitation in Billings, Montana.  She was 73 years old.
She was born at home on June 23, 1941, to Floyd and Blanche Corum in Midwest (Gas Plant), Wyoming.  She was the middle child with an older brother, Charles, and a younger brother, Eddie.  She was a bit of a rebel and told fun stories to her grandchildren about her young teenage years.
Alice worked as a waitress in Ginny Kolbâ€™s cafÃ© in Midwest where she met Ginnyâ€™s brother, Larry Johnson.  They were married on her birthday June 23, 1959, in Midwest.  She and Larry had two children while living there, Rick and Tami.  They moved to Powell, Wyoming, and began their own well service company, J & R Well Service, in 1972.  They sold J & R Well Service in 2000, and then went on with their oilfield trucking company, L.J. Trucking.
Alice was a very talented artist and would have continued to paint had her allergies not kept her from it.  She also had an eye for antiques and enjoyed going antique shopping in the many towns that she and Larry traveled to for truck pulls. They made many good friends over the years both in the oilfield as well as the truck pulling community. Throughout the years Alice always kept in touch with family and friends, sending out birthday cards or making a surprise call just to say hello and catch up.  One of Aliceâ€™s favorite things was to spend time with her grandchildren and her new great grandsons.  She loved to get her hair and nails done, have lunch dates, take road trips, and go to family events.
Survivors include her son, Rick (Colleen) Johnson of Powell; daughter, Tami Johnson of Longmont, Colorado; granddaughters, Tanna (Justin) Gonzalez and Tawny (Jared) Belford of Powell; grandsons, Kory (Ashley) Johnson and Randy Johnson of Powell; and three great grandsons, Luke and Gabe Gonzalez, and Brandon Belford.
She was preceded in death by her husband, Larry; as well as her parents and both of her brothers.
Cremation has taken place and a memorial service will be held at Hope Lutheran Church located at 588 Avenue H in Powell with Pastor Tonya Eza performing the service.  Because Alice always enjoyed springtime flowers, the family has chosen to have the service on Saturday, April 25th at 10:00 A.M.  Burial will take place at Crown Hill Cemetery.
For those who wish, memorial donations may be made to the American Lung Association or St. Jude Childrenâ€™s Hospital, or to the charity of your choice.
To send flowers to the family in memory of Alice Faye Johnson, please visit our flower store.