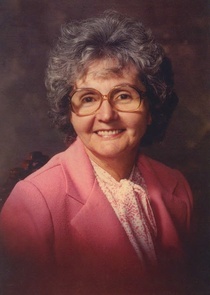 Alma Greenwood ( age 95).  Alma died , peacefully, on June 4, 2016, at Powell Valley Care Center in Powell, WY.  She was born Alma Emilia Winterroth on March 28, 1921, at Eagles Nest near Hebron, North Dakota. She was the daughter of Christoph Winterroth and Anna Buelow.  She attended country schools for elementary years and a boarding school in Halliday, ND, for two years followed by two years at Model High School in Dickinson, ND.  She attended Dickinson State College, Dickinson, ND.  Alma married Frank Kuntz in 1944 at Glendive, MT.  She taught in country schools as well as parochial schools in North Dakota and  also in  Portland, OR ,once the family moved there in 1962.  Frank died in 1981 and Alma married Louis Greenwood in 1983 in Portland, OR.

Alma is survived by daughters Kaye Igoa ( Rafael)  of Powell, WY, by Sharon Anderson ( Rob) of Powell, WY, by Bonnie Van Winckel ( Kent ) of Gresham, OR,  by  Julie Hamilton ( Robert), of Portland, OR, and sons Frank Kuntz and Alan Kuntz of Portland, OR, as well as a former daughter-in-law, Virginia Foster, of Milwaukie, OR, and one brother, Dean Winterroth, of Mesa , AZ.  She is preceded in death by her parents, husbands Frank Kuntz and Louis Greenwood, an infant daughter, Georgia Ann, a son Dale Kuntz, one sister, Edna Loeffelbein and three brothers, Arthur, Alvin, and Ervin Winterroth.

Alma enjoyed being with her family, doing handiwork, and traveling.  Her funeral will be held June 15, 2016, at Skyline Memorial Gardens and Funeral Home in Portland, OR.  She will be buried at Skyline next to her husband, Frank Kuntz.

To send flowers to the family in memory of Alma Emilia Greenwood, please visit our flower store.