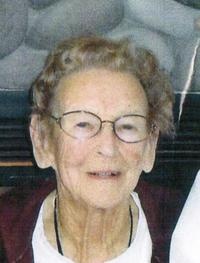 Anna Francis (Muir) Nelson quietly passed away November 6, 2013, in Cheyenne, WY.  She was born February 3, 1920, in Mentor, Kansas, to Joseph A. and Gladys (Stephenson) Muir.  She had two brothers, Joseph C. Muir and Eugene Muir, who preceded her in death, along with her parents.  Anna attended elementary school in Mentor and high school at Smalan, KS, where she graduated in 1936.
Anna married Earle A. Nelson at the Mentor Methodist Church on July 22, 1944.  Earle and Anna were married 46 years.  He preceded her in death.  From this union, four sons were born:  twins, Byron (Jeanette) of Sheridan and Bruce of Pine Bluffs, Bradley (LindaKay) of Cheyenne, and Brent (Cheryl) of Sheridan; eight grandchildren, Shaun ( Keyo) Nelson of Eagle River, Alaska, Brandi (Chris) Bilyea of Sheridan,WY, Jolene (Jason) Sanders of Lincoln, CA, Brett Nelson of Pine Bluffs, WY, Nikki (John) Williams of Midland, TX,  Blaine Nelson of Evanston, WY, Bradi Coe (Tyson) Evans of Animas, NM, and Beau (Tanya) Nelson of Sheridan, WY;  five great- grandchildren; and two great-great- grandchildren.
Mrs. Nelson and her husband moved to Powell, WY, in 1950 to homestead after World War II.  Along with being a farmerâ€™s wife and raising four boys, Anna belonged to the Mountain View Circle and the United Methodist Church.  For many years, she was known for volunteering at Powell Nursing Home as a barber for men and hair dresser for women.  Nelson also participated at the Park County Fair as a judge for 4-H projects and active in The Legion Booth.
Anna Nelson and her late husband loved to travel, whether it was in their motor home or abroad.  Before moving to Cheyenne eight years ago, Anna spent her winter months in Texas, where she was quite involved with the Senior Parkâ€™s activities.
Funeral services for Anna Nelson will be held at the United Methodist Church in Powell, WY, on Friday, November 15, 2013.  Interment will be at the Crown Hill Cemetery in Powell, WY.
To send flowers to the family in memory of Anna Francis Nelson, please visit our flower store.