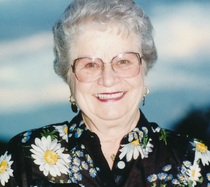 Ariel Pond born September 4, 1920, in Winnsboro, Texas, passed away peacefully early June 29, 2014, in Nampa, Idaho, at the age of 93.  Funeral services will be at 10:00 am Thursday, July 3, 2014, at Union Presbyterian Church in Powell, Wyoming, followed by internment in Crown Hill Cemetery.

Ariel was raised in East Texas, graduated high school in 1937 at Jefferson, Texas.  She went on to Mary Hardin Baylor College, then worked a few odd jobs before beginning at the Corps of Engineers in Denison, Texas.

In 1943 she met the man of her dreams, a flight instructor at Perrin Field; they were married in 1946, and celebrated 41 years together before his death.  Home was Powell, Wyoming, with many fun family and friend outings at their mountain cabin on Eagle Creek, just five miles from Yellowstone Park.

Ariel began working for a firm of doctors before they adopted son David and daughter Dee Ann.  Keeping her active in the business world was selling real estate which she found to be an interesting, enjoyable and rewarding career.  She, also, served on the board of Shoshone Title Company.

Ariel was an avid shopper and enjoyed playing bridge and traveling the world.  In her later years, the joy of her life was being â€œGrammyâ€ to Lindsay and Kara, then â€œG.G.â€ (great-grandmother) to Seth and Cole.  She moved to Idaho June 2012 to live near family.

To send flowers to the family in memory of Ariel Pond, please visit our flower store.
Send a Sympathy Card