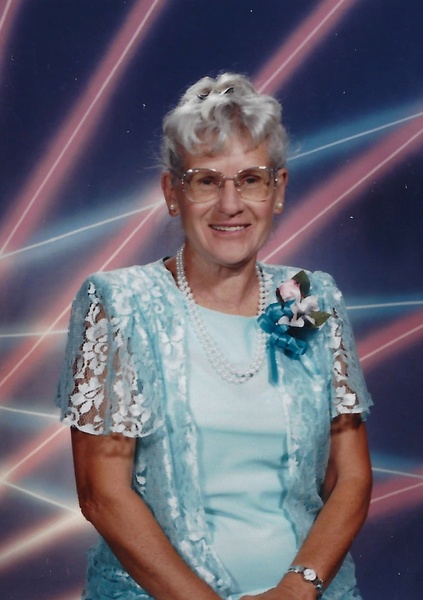 Armese E. Saunders died peacefully in her Cody, Wyoming home with her sons and extended family around her on July 1st, 2022 at the age of 94.

Armese Edna Cozzens was born in the Lovell Hospital on 11 November, 1927, to Edna Juanita (Parker) and Heber Chase Cozzens. As Armese was born on Armistice day, her Uncle Lawrence (Cozzens) created her name. Armese was a small, skinny, towhead. The family lived in a two room log cabin on an 80 acre farm, on a ditch bank close to Grandma Ellen Blanche Cozzens’ house. Then, Armese’s father moved it down the ditch to the end of the dry hillside where it still sits today. The old logs in the house had bed bugs and her mother spent years fighting them and the mice, and the snow blew right through the cracks between the logs. The floor was bare boards, no running water or electricity and no indoor plumbing. They carried water from the pond one-half mile and chopped wood to heat the water and wash. Water was never wasted, the weekly bath water was used for more than one, then used to mop the wood floor. Then  dumped used water in a slop pail to water the pigs. They lived mainly on beans and potatoes when they were lucky.  Armese says she remembers a cold house in the winter and a hot house in the summer.

Armese had one brother, Ben Lee Cozzens, who was born 16 November 1929, on their mothers birthday! Being the oldest made her responsible but also spoiled. Ben was a real tease so they had lots of fights, but they played and worked together. Armese and Ben had many of their mothers’ siblings also living in the small two room cabin at different times.  Uncles Claude, Normand and Curt, Aunt Lois, (who Armese says was like a sister), and Aunt Ruth.

Armese started school in 1934. She rode a school bus about six miles to Cowley, from elementary to high school. Each grade had one class and about 15 pupils in each. On cold winter days Armese didn’t like wearing the long underwear inside of long brown stockings and rubber overshoes, to keep from freezing. When Armese was in second grade she got into trouble. She and a friend couldn’t stop giggling so they had to stay in for recess with their noses in a ring drawn on the board. Armese says, “her ring was high, since I was so short”.

The government started putting Rural electricity on farms when she was in High School. Then they had a refrigerator, a radio and a Maytag washer.  The family got a phone after she graduated and went away to college.

Armese graduated in 1946 from High School during World War 2, from Cowley high school.  Being only 5’ 2” and weighing about 110 pounds Armese looked quite small. When they purchased her graduation gown, the merchant thought she was graduating from 8th grade, instead of high school.

After high school graduation Armese moved to Billings and worked for room and board and did baby sitting while attending Billings Business College for the fall quarter.

Armese later went back to school and earned an A.A from Northwest Community College, in Powell and a B.S. from Eastern Montana College, in Billings. She first taught Special Education and then 2nd grade for 20 years in Lander, Wyoming.

Armese moved to Cody, Wyoming in 2012 to live closer to her children. She enjoyed animals of all kinds and had many different pets throughout her life. Armese’s favorite pastimes include; horseback riding, swimming, reading, playing a guitar, line dancing, sewing, fishing, backpacking, camping, boating, 4-wheeling, snowmobiling and traveling to new places. Armese felt her best accomplishments were her children, grand-children and great-great grandchildren.  She received the most pleasure from helping her family with things they need. Armese felt her most important achievements were getting through college and teaching for twenty years and raising such good children. She felt her best trait would be a sense of humor and being ambitious. Armese was a member of The Church of Jesus Christ of Latter-day Saints.

To send flowers to the family in memory of Armese Edna Saunders, please visit our flower store.
Send a Sympathy Card