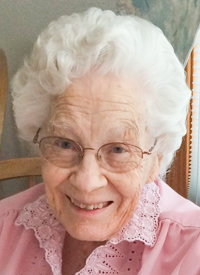 After graduating from Lovell High School in 1943, she moved to San Diego, California, where she was employed at the North Island Naval Base. Returning to Lovell in 1947, she was employed with Mountain Bell as a telephone operator. It was while in this employment she met and married Jack G Hubbell on April 21, 1949.

Their early nomadic married life was a result of Jack’s employment with Manning Oil. In 1953, their trailer house caught fire, in transit, burning to the ground along with all their possessions. They moved to Cody in 1959 and built a house on Cooper Lane, 3 miles east of town. In 1969, they moved to Denver, Colorado, where they lived until their retirement in 1991.

They spent the next few years traveling in a motor home/fifth wheel, finally settling in Powell in 1995. Everyone marveled at the loving care Audrey gave to Jack during his last few trying years of his life.

In 2017, Audrey moved to Taylor, Arizona, renting an apartment from her daughter Vickie, where she was living at the time of her passing.

She is survived by her children, Jack R Hubbell and Vickie Jo Balwin (Norman); 12 grandchildren; 31 great-grandchildren; a great-great-granddaughter; and numerous nieces and nephews.

To send flowers to the family in memory of Audrey G Hubbell, please visit our flower store.
Send a Sympathy Card