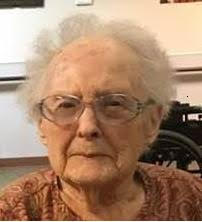 In her early life, she helped her father by working at his gas station in Xenia.

Ohio University with a Bachelor’s of Science degree in Chemistry. In 1948

she married the love of her Life, Ralph Smalley Jr. In 1949 she taught Chemistry at

the Northwest Center of the University of Wyoming in Powell. (Now Northwest College)

In 1957, she taught General Chemistry and Quantitative Analysis at

analysis. In 1958, she and her husband started their family and she became

a loving mother of three. Over the years, she enjoyed singing in the Choir, and playing the Piano for the United Methodist Church. She was an avid reader and enjoyed crossword puzzles. No matter life's hurdles, she always remained strong in her faith in Christ.

Survivors include her brother John McClelland of Kettering Ohio;

She was preceded in death by her parents, husband Ralph Jr.; son-in-law Robert Glenn

Memorial services will be held Saturday April 14, at 10:00 at the First United Methodist Church in Powell.

To send flowers to the family in memory of Barbara Irene Smalley, please visit our flower store.
Send a Sympathy Card