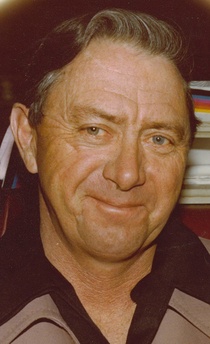 Bernard â€œBernieâ€ Christian Bjornestad of Cody died on Wednesday, July 6, 2016, at Spirit Mountain Hospice in Cody, Wyoming.  He was 86.
Bernie was born on December 2, 1929 in Billings, Montana, to Benjamin and Bertha (Nore) Bjornestad.  He was raised in the Ten Sleep area where he graduated from high school.  He later moved to the Heart Mountain area where he spent the rest of his life farming and ranching.  Bernie had other side businesses throughout his life, and also enjoyed his many years on the Heart Mountain Irrigation District Board of Directors.  Bernie enjoyed team penning and bowling.  Starting in the early 1980â€™s, he acquired the Bald Ridge forest service lease near Sunlight Basin.  He spent over 30 years trailing cows to and from his Heart Mountain ranch to the summer pasture.  He was the consummate cowboy who spent many years sitting tall in the saddle, but in later years traded in his horse for a four-wheeler. Bernie was a perfect example that if you love your job you never work a day in your life.  He was still deeply involved in the home ranch up until going into hospice.
On February 9, 1952, Bernie married Hazel (Slater) Bjornestad.  They had three children.  They we later divorced.
Bernie was preceded in death by his parents, brother Raymond Bjornestad, and sister-in-law Patricia Bjornestad.
He is survived by his brothers Orval Bjornestad of Powell, Arthur â€œBillâ€ (Dixie) Bjornestad of Manderson, Wyoming, sister-in-law Shirley Bjornestad of Utah, sons Mike Bjornestad of Wyoming, Mark (Rita) Bjornestad of Cody, and daughter Barbara (Mark) Kessler of Cody.  He is also survived by grandchildren Rachel, Jonathan, and Alex Bjornestad, Tom (Jennifer) Kessler, Laura (Rob) Lehmann, and Kelsey Kessler, as well as five great grandchildren.
Services will be held at Thompson Funeral Home on Wednesday, July 13, 2016.  There will be a viewing at 10:00 a.m. with a memorial service at 11:00 a.m. followed by burial at Crown Hill Cemetery in Powell, Wyoming.
Pallbearers are grandsons Tom Kessler, Jonathan Bjornestad, Alex Bjornestad, grandson-in-law Rob Lehmann, and nephews Rick Bjornestad and Tim Bjornestad.  Honorary Pallbearer is Justin Koehler, long-time friend and ranch employee.
Lunch will be served in the Governorâ€™s Room at the Irma in Cody from 2:00-4:00 p.m. for all those that knew Bernie and would like to share memories.
In lieu of flowers, the family asks that donations be made to Spirit Mountain Hospice for the excellent care they provided for Bernie.
Thompson Funeral Home is assisting the family with arrangements.
To send flowers to the family in memory of Bernard C Bjornestad, please visit our flower store.
Send a Sympathy Card