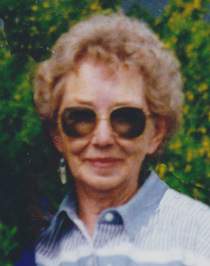 Betty was born Sept. 6, 1936, to Lucille (Babe) and Everett Wallace in Red Lodge, Mont. Betty was raised by her grandparents Ida (Crane) and Roy Hicox, along with her brother Leroy Wogoman.

She graduated from Red Lodge High School in 1954. After graduation, she worked in Billings at First Security Trust and Savings.

Betty met Thurman Briggs and married him in Red Lodge at the Congregational Church on Jan. 18, 1956. They lived and worked at Few Acres in Crandall, and then at the Lazy EL in Roscoe, and later for Dr. James Kane at his ranch on the state line in Clark. After Dr. Kane sold out to Don and Mick Fraker, they stayed on, with Thurman working at the feedlot and Betty working in the office.

They lived in Silesia, Mont., for a while, helping Thurmanâ€™s mom. They bought a place in Deaver and later moved to Loveland, Colo., where Betty worked for K-Mart.

After Thurmanâ€™s death, Betty moved back to Powell to be close to her family.

While living at Frakerâ€™s feedlot, Betty joined the Order of the Eastern Star - Silver Leaf Chapter in Belfry, Mont. Betty was an avid bowler, starting in the 1960s at Bridger Lanes and last at Classic Lanes. She had many bowling awards.

Most of her life was spent raising her kids and helping them in their many ways of life, from farming, restaurants, raising grandkids, burning ditches or picking berries. She was always there.

Life was not always easy for Betty, but she made the best of it through her children, family and good friends, enjoying all the special moments. In the end, her thoughts were still on how this was affecting all of them. She was loved and will be missed.

Funeral services will take place at 2 p.m. Friday at Thompson Funeral Home in Powell, with a gathering to follow at the Eagles.

Thompson Funeral Home is in charge of arrangements. Condolences may be sent to the family online at www.thompsonfuneral.net or to P.O. Box 807 Powell, WY, 82435.
To send flowers to the family in memory of Betty Jo Briggs, please visit our flower store.