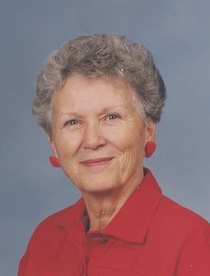 Betty Karlin died peacefully on March 13, 2016, at the Powell Valley Care Center. She had just celebrated her 88th birthday.
Betty was born on Feb. 27, 1928, in Scottsbluff, Nebraska. When her birth mother died shortly after she was born, she was adopted into a loving forever home by John and Valeria Gericke. Her family moved to Powell when she was a teenager and there she met her future husband, Tom Van Wagoner. They were married on Oct. 23, 1943, and farmed and milked dairy cows for many years.
To this union were born three children, Linda, Gerald â€œJerryâ€ and Roger. After Tom and Jerry died in a tragic accident in 1973, she later married Hubert Johnson. Upon his death, she decided to pursue her love of geology and archaeology and traveled to Mongolia, and the Gobi Desert, China, Peru, the Galapagos Islands and Israel.
Her many interests included decorating wedding cakes and arranging wedding receptions. That led to her managing and cooking at the Powell Country Club and then to general catering in the area. Many will remember the amazing meals she created. She wrote a column for the Powell Tribune called â€œBettyâ€™s Country Cooking,â€ and the Tribune published a cookbook of her favorite recipes. She also was an avid painter.
She later married Ray Karlin and spent eight happy years with him before his passing. She then became a member of the Travelerâ€™s Band and played a mean piano up until her death. She was a longtime member of the Presbyterian Church and the Shoshone Rock Club in Powell.
She will be remembered for her dedication to her family and the vibrant life she lived. Betty will be greatly missed by all her family and friends.
Survivors include her daughter Linda Thomas of Powell and son Roger Van Wagoner (Marie) of Billings, Montana. She was blessed with five grandchildren: Tom (Lida), Scott (Christine), Roger Sanford (Laura), Tim (Aimee) and Jeremy (Rebekkah) Van Wagoner; and many great-grandchildren, nieces and nephews. She is also survived by her sister, Barbara Noeth of Littleton, Colorado.
She was preceded in death by her parents, John and Valeria Gericke, her brother William Gericke (Carol), husbands Tom Van Wagoner, Hubert Johnson and Ray Karlin, son Jerry Van Wagoner and granddaughter Jodi Kay Sanford, and son-in-law Bob Thomas.
Services are scheduled for Friday, March 18, at 10 a.m. at the Presbyterian Church in Powell. In lieu of flowers, donations may be made in her name to the Homesteader Museum.
Thompson Funeral Home is in charge of arrangements.
To send flowers to the family in memory of Betty Lou Karlin, please visit our flower store.