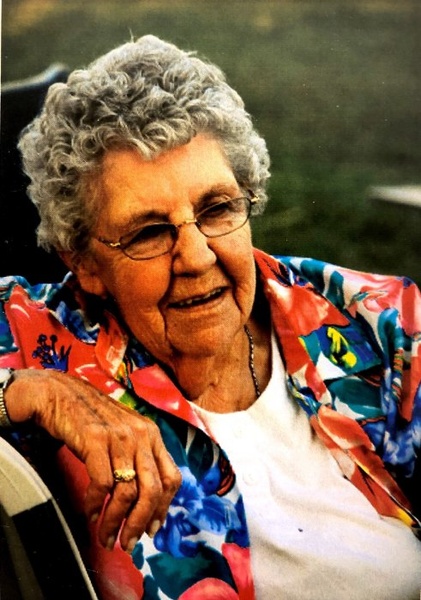 “Bebe” Beverly Keller was born July 27, 1928 in Cozad NE to Fred and Blanche Earhart Keller. Beverly passed away Aug 1, 2018 after a brief battle with cancer.

She came to Powell as an infant with her mother and Earhart Grandparents to farm in the Willwood area. Her Father stayed behind to ride the train and bring out their belongings and farm equipment. Fred and Blanche liked the area and decided to stay.

Beverly attended schools in Powell, graduating in 1946. While in school she met the lover of her live, John O Gibson, while they were both working at the Teton Theater.

Johnny and Beverly married June 30, 1948 and together raised their 4 children, Connie Good, Jack (Peggy) Gibson, Stewart Gibson and Toni (Ray) Cartwright. John’s job with MDU took them away from Powell and eventually from Wyoming. They lived in North Dakota, South Dakota, Montana and back to North Dakota where John finally retired. In each location Beverly would volunteer in hospitals, nursing homes and meals on wheels. Beverly spent quite a few years as a Girl Scout leader, teaching sewing for 4-H, she was also a member of the Northend Club for many years. After retirement, John and Beverly moved back to Powell where they have remained all these years. Although they became AZ Snowbirds, the mountains of Wyoming is where they like to be. When they moved back to Powell she became a member of the local P.E.O. chapter and always enjoyed her time with that group of ladies.

Beverly entered Spirit Mountain Hospice in Cody on her 90th birthday. She was able to enjoy a bit of her very chocolaty, chocolate birthday cake. She passed away peacefully with her family by her side.

Funeral services with be held Aug. 7th at 11:00 at the United Methodist Church in Powell. Burial will be in the Crown Hill Cemetery.

viewing will be Monday August 6 at the funeral home from 6-7:30

burial will be in the Crown Hill cemetery

To send flowers to the family in memory of Beverly Gibson, please visit our flower store.