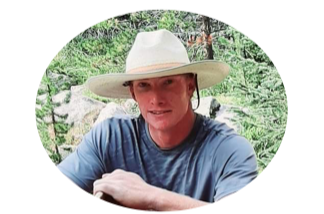 Caleb grew up in Deaver always looking for an opportunity to be outdoors exploring the wild blue yonder. When he was younger, he and his brothers would hunt in the “Bird Park” looking for an unsuspecting bird to shoot. He also enjoyed helping his Grandpa Estes on the farm with the daily chores. His Grandpa Estes lovingly called him “Barbwire”.

He was homeschooled through ninth grade, then attended Rocky Mountain High School. He graduated high school in 2012.

Caleb was a people person with a magnetic personality and an infectious smile. He was kind and considerate to everyone regardless of their social status. He had a huge heart and would always put others before himself.

Caleb was an avid hunter, fisherman and trapper spending many a day tramping the countryside with his Grandpa Metz hunting for game. He looked forward to the challenge of trapping the elusive bobcats that roamed the sand hills near his home each winter. When the hunting seasons were closed, he was out looking for Indian artifacts which he frequently found.

In 4-H, Caleb excelled in the disciplines of archery and shotgun, winning many trophies at the state competition. He won the Class C Division in archery at the State Shoot in Douglas 5 years in a row.

Football was his passion in middle and high school. His style of play was full throttle, hard hitting, no nonsense football. His senior year he was one of the top linebackers in defensive points in the state of Wyoming. After high school he played one season of football at Luther College in Iowa.

He was a member of the Catholic Church and served as an altar boy as a teenager. He was always quick to defend his faith especially when someone was talking disrespectfully about Mother Mary.

After graduating high school, Caleb worked in many different construction venues, including fencing with Matt Hubbell, construction with John Legg, R & S Well Service, SEI, Hinckley & James, BAIRCO, and most recently Shoshone Trucking. He also operated his own fencing company for a short time and was saving to start a trucking business and to own a farm with his brother Ben. Caleb was a very hard worker and no matter the job he tried to learn and excel in his duties.

Caleb is survived by his parents Dale and Michelle; six siblings, Malerie, Benjamen, Dominic, Elijah, Maria, and Eaen; nephew Jayce; grandparents, George and Cleo Estes, Rich and Carolyn Metz; and numerous aunts, uncles and cousins. He was preceded in death by his brother Anthony.

Dear Caleb, you will be greatly missed by your family and many friends. God rest your soul!

Funeral arrangements are being made by Thompson Funeral Home in Powell. The vigil service will be held Friday, September 18, at 6:30 p.m. at St. Barbara’s Catholic Church in Powell. The Requiem Mass (funeral) will be September 19, at 10 a.m., in Laurel, Montana at St. Anthony’s Catholic Church. Burial will take place immediately after Mass at the Deaver Cemetery, followed by a reception at the Deaver Town Hall. The Funeral Mass will also be live streamed on the Thompson Funeral Home Facebook page.

To send flowers to the family in memory of Caleb Estes, please visit our flower store.
Send a Sympathy Card