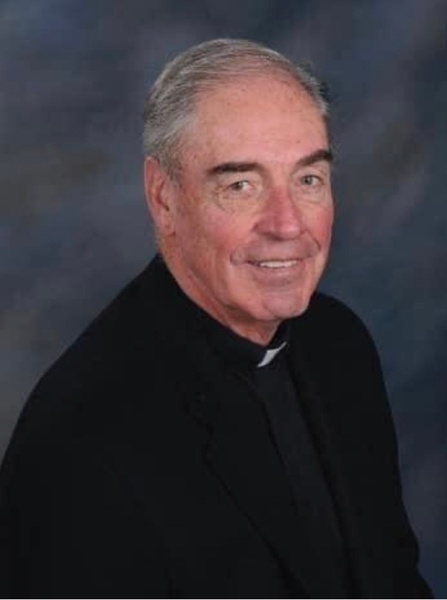 The Funeral Mass will
be celebrated on Friday, July 31 at 10 a.m. and will be livestreamed and can be viewed by going to
https://www.youtube.com/watch?v=6OJ1uVKydpA.

Diocese of Cheyenne announces Funeral Liturgy and Memorial Masses for Father Carl Beavers
Father Carl A. Beavers, retired priest of the Diocese of Cheyenne, died suddenly on July 23, 2020, at
age 77. Born on September 16, 1942, in Sheridan, Wyo., Father Beavers studied at St. Thomas Seminary
in Denver, Colo., and his priestly ordination was celebrated by Bishop Hubert Newell on May 24, 1968.
During the 44 years during which he was a priest for the Diocese of Cheyenne, Father Beavers served at
St. Barbara in Powell, St. Laurence O’Toole in Laramie, St. Joseph’s Children’s Home in Torrington,
Cathedral of St. Mary in Cheyenne, Our Lady of the Mountains in Jackson, and Holy Spirit Catholic
Community in Rock Springs. He also served as Chancellor for the Diocese of Cheyenne from 1990 to
1995.
Because of COVID-19 safety guidelines, services will not be open to the public. The Funeral Mass will
be celebrated on Friday, July 31 at 10 a.m. and will be livestreamed and can be viewed by going to
https://www.youtube.com/watch?v=6OJ1uVKydpA.
Three Memorial Masses will be held for Father Beavers: Cathedral of St. Mary in Cheyenne at 5:15
p.m., Tuesday, August 4—please check the website (www.stmarycathedral.com/) for more information;
Our Lady of the Mountains in Jackson at 11 a.m. Tuesday, August 4—see below for livestreaming
information; Holy Spirit Catholic Community in Rock Springs TBA—please go to the website
(www.hsccwyo.org/) for information.
The Memorial Mass at Our Lady of the Mountains will be livestreamed and links will be made available
on Facebook (@OLMCatholicChurch), the website (www.olmcatholic.org), and via YouTube at OLM
Catholic.
Memorial suggestions are: St. Joseph’s Children's Home, P.O. Box 1117, Torrington, WY 82240-1117;
St. Edmund Building Fund, P.O. Box 217, Ranchester, WY 82839; Ranchester Dayton Rotary, P.O. Box
451, Ranchester, WY 82839; Seminarian Education Fund or St. Joseph’s Society for Retired Priests
Fund, Diocese of Cheyenne, P.O. Box 1468, Cheyenne, WY 82003

Carl A. Beavers, 77,  retired priest of the Diocese of Cheyenne, died suddenly on July 23, 2020 near Dayton, Wyoming with his dog "Cooler" by his side.  Father Beavers was born on September 16, 1942 in Sheridan, Wyoming to Clyde A. (Buck) and Edna C. Breen Beavers.

His education began at Dayton until the middle of the fourth grade when the family moved to Powell, Wyoming.  After graduating High School in 1960, he attended Northwest Community College in Powell for one year on a football scholarship.  A visiting priest from Ireland was very instrumental in his decision to study for the priesthood.  Carl entered St. Thomas Seminary in Denver, Colorado in the autumn of 1961 and was ordained on May 24, 1968.

After serving a few months in Powell, he became an assistant priest at St. Laurence O'Toole in Laramie, Wyoming.  From there, he took up the reins of superintendency of St. Joseph's Children's Home in Torrington, Wyoming.  He recognized advantages in raising beef cattle to both feed the resident children and make available more 4-H and FFA projects to them.  As he saw St. Joseph's taking on a new role as a treatment center, Father Beavers reflected on the philosophy which had guided the institution during its years as an orphanage and which still inspired its efforts in working with  emotionally disturbed children.  He, aided by Bishop Newell, articulated that philosophy in 1978.

From Torrington, Father Beavers became the Rector at St. Mary's Cathedral in Cheyenne, Wyoming for 17 years.  He was also the Chancellor, Moderator of the Curia and Superintendent of Seaton High School.  When the Wyoming State Senate was in session, he offered the invocation each morning for several years  He also offered prayers on the floor of the U.S. Senate Session for one session.

His next move took him to Jackson, Wyoming where he became the pastor of Our Lady of the Mountains Parish.  While there, he oversaw the planning and construction of their beautiful new church.

His final assignment was to Rock Springs, Wyoming pastoring Saints Cyril and Methodius and Our Lady of Sorrows Parishes, along with being in charge of the Parochial School there.

After retiring on June 30, 2012, he moved back to Dayton, Wyoming.  Retirement was in name only as he kept busy with most of the previous functions of the church, with the exception of office duties.

Around the State he became known for his articulate, carefully reasoned sermons and his mastery of every social situation.  Poise, combined with a hearty enjoyment of sports (especially the Wyoming Cowboys, Notre Dame, the Colorado Rockies and the Denver Broncos), ranching and hunting (even participating in Wyoming's One Shot Antelope Hunt when Mike Sullivan was Governor) won friends for Father Beavers from all over the State.

Survivors are his brothers Jack (Geraldine) of Laramie, Jim (Barbara) of Powell and sister Jeanette West of Dayton.  Nephews: Clint Beavers of Laramie, Mark West of Arlington, MA,  Matthew West of Denver, CO, and Brian Beavers of Powell.  Nieces:  Beth St. Clair of Laramie, Becky Beavers of Cheyenne and Michele West of Denver.  In addition to his parents, preceding him in death are nephews Brad and Bret Beavers, and brother-in-law, Louis West.

To send flowers to the family in memory of Carl A Beavers, please visit our flower store.