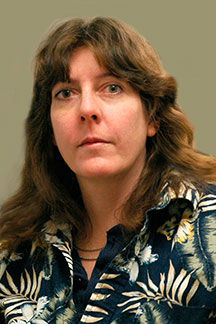 Carrie was born in Redwood City, Calif. on Feb. 21, 1963, to Robert “Bob” Matteson and Deanna (Noecker) Matteson. She attended school in Redwood City, as did her younger brother Donald Matteson until the family moved to Cody in 1973.

After graduating from Cody High School in 1981, Carrie worked at various jobs, including helping out at The Frame House (the family’s frame shop), and spending several years as a seismograph field crew member, during which time she married her first husband David Royal in 1987.After divorcing in 1988, Carrie met and married the love of her life, Robert (“Bob”) Reher on Jan. 1, 1989. Bob worked as a truck driver, and was also a versatile musician who played in the local Cody band “Moonshine.” Carrie’s biggest heartbreak was Bob’s death in 1999.

Carrie was an imaginative person and was always up for an adventure. She vividly remembered her experiences and everyone who was a part of them. This made her a spectacular storyteller, providing laughter for anyone who lent an ear.

She was a lover of nature and wild things, which made her an avid rock and fossil hound, as well as a faithful lover of animals. She was clever, creative and artistic, drawing and painting the landscapes and animals she loved so deeply, and even a portrait of some interesting person here and there.

Carrie will live on in the hearts of her friends and family through the colorful memories she gave us, her bighearted nature that we all have tender experiences with, and through her beautiful creations that we will all continue to enjoy.

She is survived by her mother Deanna Matteson and brother Don Matteson, both of Cody; nephew Kegan Higgins of Acworth, Ga.; uncles Tom (Deeann) Noecker of Banner, Wyo. and Glen (Claudia) of Moscow, Idaho; as well as nine cousins and their families.

Carrie was preceded in death by her husband Bob Reher; her father Robert Matteson; cousin Zack Noecker; two sets of grandparents; and numerous aunts and uncles.

To send flowers to the family in memory of Carrie Lynn Matteson, please visit our flower store.
Send a Sympathy Card