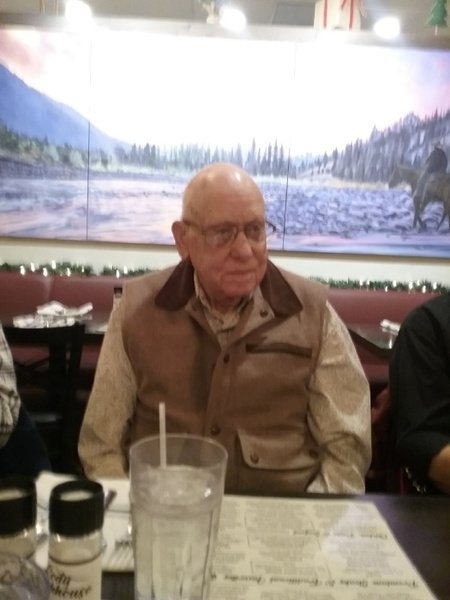 On March 31, 15 days after his 88th birthday, Charlie (Charles) Chelberg joined his heavenly family. Charlie was born on March 16, 1932, in Loveland, Colorado, to Dan and Gladys Chelberg. He had an older sister Esther and younger sister Joyce.
The Chelbergs headed to the Custer, Montana, area to join other family in 1936. Even at 4 years of age, he was excited, telling stories of the trip. Charles graduated from Custer High School in 1950. By the spring of 1964, he was working in Powell, where he met a gal named Jane. He married her on November 2, 1964, in Cody. The couple celebrated 55 years together in 2019.
Charlie worked in the oil fields of Wyoming and Montana. In 1972, they started Ralston Repair Service, later adding irrigation sales and service.
In 1984, they traveled the western states, working many different types of vocations. He went to work for his son Steve in 1996 and finished his working career on the farm with Steve and Julie. Jane and Charles shared many memorable years with the Good Sam Organization nationally and locally, Charlie serving as President of the Cody RV chapter for several years.
Survivors are his widow Jane, children Charlene (Ken) Angelo of LaPaz, Mexico; Dan Chelberg of California; Kay (Randy) Townsend of Utah; Steve (Julie) Thompson of Powell; Jerry (Ruth) Thompson of Powell; and John (Becky) Chelberg of California. Charlie was proud to be the father of three and dad of six. He has nine grandchildren: Josh (Jennifer), Heather (Carl), Todd, Spenser, Bryce (Cori), Maria (Rusty), Blake, Jamie and Charles; seven great- grandchildren; two sisters, Esther Cuthbertson and Joyce (Chuck) Stanley, both of Billings, Montana; four nieces, Pati, Debbie, Cindy, and Linda; and one great-niece, Darcy.
Because of the restrictions from the coronavirus, no services will be held until later in the year.

To send flowers to the family in memory of Charles F Chelberg, please visit our flower store.