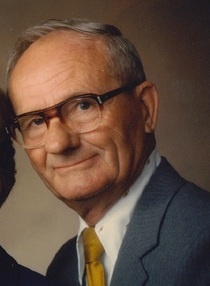 Charles Duane Dorman, age 90 of Powell. WY passed away June 17 in Billings, MT. Funeral services will be Tuesday June 23 at 2:00 p.m. at the Thompson Funeral Home in Powell. Visitation will be June 22 from 6-7:30 p.m.
Duane was born in Litchfield, NE to Charles and Lennie Dorman on Sept. 19, 1924. Duane attended school in Litchfield and then began farming with his father in the same area. On Dec 7, 1943 he married the love of his life, Beulah Roberts, in Broken Bow, NE. Their first son Jerry was proudly welcomed into their family while living in Nebraska.
During the next few years Duane made several trips to Powell and eventually he and Beulah bought a small farm in 1946 in the E. Willwood area S of Powell. They moved to the farm that same year with all of their belongings packed into their 1939 Chevy with a small trailer in tow. Duane was always a hard worker and proud provider for his family. Together, Duane and Beulah continued to work their farm and take on additional jobs to support their soon to be growing family.
Their family grew in size over the next few years to include Jolene, Steven, Rick and Jim. Duane continued to be a steady provider for his family with a new job in 1952 at the Elk Basin Gas Plant North of Powell. In 1954 they sold the Willwood farm. Duane, being the ambitious individual that he had always been, then purchased another farm N of Powell and continued to farm and simultaneously worked at the Elk Basin Plant for a number of years. Duane sold the farm N of Powell in 1991. His employment resume of supporting jobs and farming is very extensive.
Duane enjoyed traveling. Duane and Beulah traveled extensively within the US with their motorhome. They made several vacation trips to Yuma, AZ over the years. Duane retired from British Petroleum in 1982 after working there for 30 years Duane and Beulah eventually bought a lot in Yuma, installed a home there, and would then spend 24 winters there.
Duane loved his family, truly enjoyed his grandchildren and great grandchildren, and continued to be active in retirement. Over the years he enjoyed boating, fishing, riding his Honda Goldwings (he had several), adventuring to many sights and locations. He will be remembered by his family and all who knew him as a true family role model, an excellent provider and husband. He was a true gentleman to the very end. We will all miss him.
Duane is survived by his wife, Beulah, his three sons Steven Dorman (Lanae) Salem, OR, Rick Dorman (Pixie) Leeds, UT, Jim Dorman (Dee) Billings, MT, and one daughter Jolene Sharbono (Chet) Billings, MT. He is also survived by his 16 grandchildren, 19 Â¾ great grandchildren and 7 great-great grandchildren; in addition he is survived by several nieces and nephews.
He was preceded in death by his son Jerry Dorman and parents Charles and Lennie Dorman, two sisters Laurena Land and Wilma Gaston and one brother Lewis Dorman.

To send flowers to the family in memory of Charles Duane Dorman, please visit our flower store.