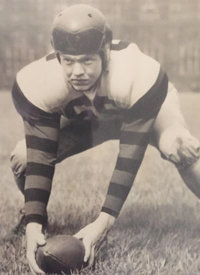 Charles William (Bill) Hassler died April 9, 2020. He was 92 years old at the time of his passing and eager to cast off this mortal coil. He rejoins his wife of 67 years who passed 39 days before him. Claudia had been his loving partner throughout their long-shared adventure and he struggled to continue on without her.

Bill was born in the Presbyterian Church manse in Canton, Pennsylvania, on Aug. 12, 1927, to Charles Victor and Mabel Cox Hassler, joining his older sister Mary Jane. His father was a Presbyterian minister and his mother was a homemaker.

Bill grew up in Media, Pennsylvania, a suburb of Philadelphia. For the first 25 years of his life, Bill thought almost exclusively about football. As a schoolboy, he got in trouble with his dad once for lining the church yard to make it into a bona fide football field, but football proved to be his ticket, for he won a scholarship to the University of Pennsylvania.

When enrolling for classes he got into the wrong line, but decided he would change majors rather than have to go to the back of another long line. He made lifelong friends on the gridiron and was one of two surviving members of the 1950 team. Football was interrupted by military service in the Navy. He briefly played professional ball but was undersized for the NFL, so he took a job with Sun Oil Company and ventured west to the Texas oilfields.

He wasn’t there long before he felt called to the ministry. He returned East, married, and attended Princeton Seminary. On graduating, he and Claudia moved to Allentown, New Jersey, where he served his first church. Son Chuck and daughter Emily joined the family there.

In 1957, Bill decided to become a mobile minister for the Presbyterian Church in northwest Montana, thousands of miles from Pennsylvania. Bill served several small churches in the vicinity of Flathead Lake. In truth, the job paid almost nothing and Bill once had to borrow money from his landlord to buy a tire for the family car, but he loved Montana.

An avid hunter and fisherman, he had found his place. The fishing and hunting in the Big Sky Country were something one could only dream of in Pennsylvania.

After a few years, Bill took a position as campus pastor at the University of Montana, where he also coached and taught world religions. When he was not working, he could be found fly fishing on the Blackfoot, Madison and Big Hole rivers, but his favorite fishing stream was Rock Creek. When he was a young man, Bill was truly beautiful to watch fly fishing.

As campus unrest began to ramp up in the late 1960s, Bill and Claudia made the fateful decision to accept the church pastor position at Union Presbyterian Church in Powell. It was in Powell that son Chris completed the family. While ministering to his congregation, Bill also served the larger community, helping establish the Council of Community Services and the Powell Ministerial Association. Along the way, he hunted and fished and took his family camping as much as he could.

In 1978, Bill took a position as associate synod executive with the church in Pueblo, Colorado, where he served until retirement from the active ministry in 1991.

On retiring, he talked Claudia into returning to Powell, where he resumed his active outdoor life with a passion. Bill loved his horse Whoopee and later his mule Crocker and had numerous backcountry adventures with both of them before several horse wrecks prompted Claudia to lay down the law, backed up by his physician Lyle Haberland, who said he wouldn’t treat him for any more wrecks. So he bought a Rzr and thereby bought a precious few more years hunting elk. He killed a six-point bull well into his 80s.

But time stops for no man, and gradually his glaucoma began to rob him of his vision. His old football injuries began to evidence themselves and his world began closing in on him. Bill did not age gracefully because he did not want to age gracefully. He fought it every step of the way.

It was in his final years of life that he and Claudia found a church home that they really grew to love in St. John’s Episcopal Church. They looked forward every Sunday to attending church there, where they were welcomed and loved. They attended services together until the final weeks of life and it was the high point of the week for both.

Bill was a member of the greatest generation. He was selfless and courageous and tough. He lived through depressions and wars and tragedies and ministered to countless people. He loved his wife and his kids and his country and he loved God. He was a faithful servant until the end and will be sorely missed by those he leaves behind.

To send flowers to the family in memory of Charles William Hassler, please visit our flower store.
Send a Sympathy Card