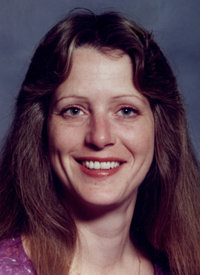 Cherie Dwyn (Gladish) Peterson was a resident of Rocky Mountain Manor in Powell. She was called home to the Lord on Wednesday, Nov. 11, 2020, at Powell Valley Hospital, at the age of 67.

Cherie was born in San Bernardino, California, to Charles Daniel Gladish and Charlou (Hill) Gladish on Dec. 31, 1952. She was the fourth of their six children. Cherie first married at the age of 16 in 1969, and after she graduated high school in 1971, started her family.

She worked as a miner for Kaiser Steel in Eagle Mountain, California, in her earlier years and later changed careers, working as a pharmacy technician for Loma Linda University Medical Center.

Cherie spent 40 years as a resident of Phelan, California, with her five daughters. She was a strong believer in Jesus and shared her faith with her family and friends. She was baptized at New Life Church of Powell, in July 2017.

Cherie was an active member of the VFW Ladies Auxiliary and served as district president in the early 1990s.

Those who knew Cherie would tell you she was very thoughtful of others and had the biggest heart. She would offer shelter to anyone who needed it and always gave what she had, even if it wasn’t much.

Cherie was an avid volunteer for church activities as well as cuddling babies at the local hospitals. She loved many activities including being a member of the bowling league, crocheting and latch hooking, sewing, gardening, country line dancing and playing bingo. She enjoyed the great outdoors, including being at the beach, tubing at the lake, hiking, exploring and visiting historical monuments. She never missed an opportunity to be an active cheerleader for her children and grandchildren, whether it was watching them play sports or attending a recital.

Cherie was a very proud mother, Nana and great-grandmother, and would say that her family was her greatest accomplishment.

A memorial service in honor of Cherie will be held at New Life Church of Powell on Thursday, Nov. 19, 2020, at 11 a.m. We ask respectfully that all attendants wear a face covering.

In lieu of flowers, the family has asked that donations in honor of Cherie Peterson be made to the VFW Auxiliary.

To send flowers to the family in memory of Cherie Dwyn Petersoon, please visit our flower store.
Send a Sympathy Card