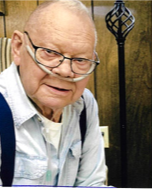 Norman Meidinger, 94, passed away on October 12, 2022. Norm was the tenth child of John C. Meidinger and Magdalena Schultheiz,  and as the youngest, was the last born of that generation.

He grew up during the depression of the 1930’s, attending a rural school through the 6th grade, walking to and from school, a distance of one and half miles -in hot or cold conditions, carrying his lunch pail ( a yellow recycled lard bucket). His lunch usually consisted of homemade bread, butter and syrup or jelly.

Norman attended Terry High School, graduating in 1945. He then went to college at Rocky Mountain College in Billings, Montana. He worked at various jobs to earn money to complete his Bachelor of Science Degree.

He met Wanda Ryles from Powell, Wyoming while in college and they married on August 21, 1948, celebrating 56 years of marriage.

Norman started his teaching career (43 years) in rural schools in Montana, then came to Wyoming where he taught in Lovell, Cody and Powell. His  last 32 years in the education field were at Powell High School where he was the only Biology Instructor for many years. He retired from teaching in 1992.

Norman was community minded. He served eight years on the Powell City Council during which time Norman carried a petition to form the Southside Improvement District of Curbs and Gutters. Other projects the City Council worked on, during his time of service, were infrastructure of streets, water, sewer and  the electrical system, establishing  Homesteader Park and the East Side Water Tower. The addition of grass and tress to the canal banks were also part of the improvement. Then along with Keith Bloom, helped in the establishment of the Recreation Board’s Ski bus.

Other boards  he served on were; Rocky Mountain Manor Board (8 years), the Wyoming State Girl Scout Council (8 years), the North End Water Board (10 years) and the Powell Senior Citizens Board(two terms).

Services will be held at Thompson Funeral Home on Wednesday, October 19th, 2022 beginning at 10:00 am.

In lieu of flowers, memorial contributions may be given to the Northwest College Foundation, 231 W 6th Street, Powell, Wyoming 82435.

To send flowers to the family in memory of C. Norman Meidinger, please visit our flower store.