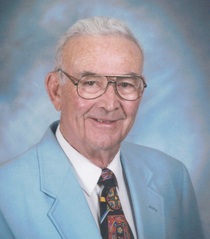 Claude Warren â€œMacâ€ McClain died on Friday, Oct. 31, 2014, at the Powell Valley Care Center. He was 90.
Mac was born on May 25, 1924, in Manzanola, Colo., to Cora Anna (Drescher) and Orville Orlando McClain.
He attended three years of college before going to work with the National Park Service, becoming a ranger and an assistant superintendent.
Mac lived in various parks throughout the United States, as well as in Homestead, Fla., Penrose, Colo., Naples, Fla., and Powell.
Mac served in the United States Marine Corps on the USS Rendova in World War II.
On Feb. 26, 1955, Mac married Joan Alice Meline. The couple raised a son and a daughter.
Mac enjoyed working with wood and he built many pieces of furniture over the years, including two grandfather clocks.
Mac attended the United Methodist Church.
He was preceded in death by his wife Joan A. McClain and brothers Eugene H. McClain and Robert D. McClain.
Mac is survived by his son Mark Warren (Susi) McClain and Jan M. (Edwin) Sapp; sister Shirley (William) Burrell; seven grandchildren and 12 great-grandchildren.
At Macâ€™s request, there will be no services. He and his wife Joan will be interred at Mountain View Cemetery in Manzanola, Colo., at a later date.
Thompson Funeral Home and Crematory is assisting the family with arrangements.
Condolences may be sent to the family online at www.thompsonfuneral.net or to P.O. Box 807, Powell, WY, 82435.

To send flowers to the family in memory of Claude "Mac" McClain, please visit our flower store.
Send a Sympathy Card