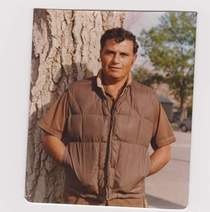 Dale C. Montoya, 82, of Powell died Monday, March 20, 2017, at Cheyenne Regional Medical Center in Cheyenne, with his family by his side. Dale died suddenly of respiratory issues brought on by pneumonia and unknown causes.
He was born Sept. 2, 1934, in Dulce, New Mexico, the son of Eduardo Gomez and Maria Eufemia Montoya. He joined the United States Air Force then married Mary Delores Garcia on May 28, 1954. Together they had three children, Mary Katheran McCoole (Lee), James Dale Montoya and Lori Dee Lotten.

They made a life for their family traveling the world for 22 years of active duty status, and he earned the rank of Master Sergeant. Dale retired in 1974 here in Powell, continuing his career with Amoco Corporation.

He is survived by his daughters, nine grandchildren, 10 great-grandchildren and many nieces and nephews.

He was preceded in death by his wife Mary Delores, his son James Dale and all his siblings.

A rosary will be held Friday, March 24, at 7 p.m. at Thompson Funeral Home in Powell. Graveside services will be held at noon on Saturday, March 25, at Crown Hill Cemetery, with a reception to follow at St. Barbaraâ€™s Hall.

Cards and condolences can be mailed to 456 North Clark St. Powell, WY 82435. Flowers can be sent to Thompson Funeral Home.
To send flowers to the family in memory of Dale C Montoya, please visit our flower store.
Send a Sympathy Card