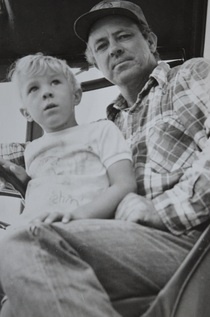 Daniel Mark Badura
June 19, 1932 â€“ June 17, 2015
Dan was born in the family home located between Mason City and Broken Bow, Nebraska. His was a small family that
was part of a much larger family. His mom and dad were one of 12 siblings each so there were lots of cousins. Many of the
Baduras moved into the Clark, WY and Billings, MT area during the Dustbowl and Great Depression era of the late 1920â€™s.
His parents, Antonia Franckowiak Badura and Peter George Badura, moved to Clark with him and his brother when Dan was
around 2 years old. He went to Elementary school in the one room Pioneer School across the road from the ranch, which is now a Registered Histori- cal Site. He went to Billings Central High School, living with another studentâ€™s family during the week and going home to Clark on the weekends. The road wasnâ€™t paved in those days. He graduated in 1950. He attended Notre Dame, graduating in 1954, second in his class with a BA in economics. He joined the US Air Force afterwards, being assigned to the legal department as a clerk during the Korean War. He joined IBM in Chicago, IL after his time in the Air Force, but not for long. His dad, Peter, was found to have cancer and Dan went home to take over the fam- ily farm and ranch. He loved playing the piano and was very good at it. He was a voracious reader, especially of history, a deep thinker, and quite a talker. He enjoyed the ten years he lived at The Manor in Powell where a lot of the residents remember his piano playing. He moved back to the ranch 6 years ago when he was no longer able to live on his own. He spent most of his life on the ranch and that is where he wanted to be when his life came to an end.
He married late in life at age 40, and divorced 12 years later. He and Carol had 4 children, Mark, Kimberly, Christopher and Joseph. Mark and his wife, Beau, live on the family ranch and have 2 boys, Reigan and Logun. Kim and her husband, Jason Shroyer, have 3 children, Grace, Katie, and Carter. They live in Billings Heights as does Carol. Joseph is single and living in Big Sky, MT. He was preceded in death by his parents, his brother, James, his son Christopher, and numerous aunts, uncles, and cousins. He had a stroke right before Easter. We are very grateful to all those who helped with his care at home, especially Melissa Jebens who was very good with him. What a blessing you were to us during that time.
To send flowers to the family in memory of Daniel Mark Badura, please visit our flower store.