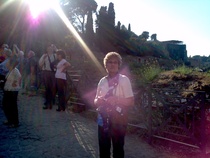 DeLaine Lamb of Powell died at her home in Powell on Saturday, June 14, 2014. She was 66.
DeLaine was born Dec. 22, 1947, in Minot, N.D., to Harvey and Loretta (Schaefer) Gilbert. She moved to the Ralston Bench in 1952 and attended Powell schools. She graduated in 1966.
DeLaine married Curt Lamb on Nov. 16, 1968, in Powell. They lived in Riverton, where their first child, Monique was born, later moving back to Powell where their second child, Mitch was born. They lived in Scotland and Egypt in the mid '70s where Curt was working. They then returned to Powell where DeLaine was a housewife and mother. She was a member of St. Barbara's Catholic Church.
She later went to work at Farm Bureau Insurance, where she worked for almost 27 years. She retired in December, 2013.
DeLaine enjoyed playing bridge, scrapbooking and doing craft projects with her sisters and friends. Most of all she enjoyed just being with family and friends. She was a very caring and loving person and will be greatly missed.
DeLaine was preceded in death by her parents, Harvey and Loretta Gilbert, son Mitch Lamb and brother Doyle Gilbert.
She is survived by her husband Curt, daughter Monique (Mike) Walls of Buckley, Washington., brothers Dwight (Dawn) Gilbert of Powell, Doug Gilbert of Cheyenne, and sisters Diane Gilbert, Dorene (Gary) Asay, and Debbie Karst of Powell, and many nieces, nephews, and great-nieces and great-nephews.
Services will be at 10 a.m. Thursday, June 19, at St. Barbara's Church with visitation at 9 a.m. Rosary will be at 7 p.m. Wednesday, June 18.
Memorials may be made to First Bank of Wyoming for organizations that were special to DeLaine.
Thompson Funeral Home is in charge of arrangements and condolences may be sent to the family at www.thompsonfuneral.net or P.O. Box 807, Powell, WY 82435.

To send flowers to the family in memory of DeLaine Elaine Lamb, please visit our flower store.
Send a Sympathy Card