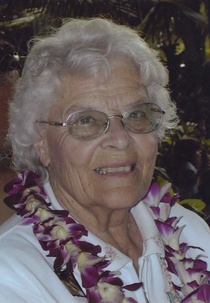 
Dixie Lou Olsen passed away at the Powell Valley Care Center July 12, 2016. Born in Garland, Wyo June 4, 1928, she was the first child of Horal B. Sheets and Maggie Lou Ewalt.
Dixie grew up on the family homestead, her dad farming on the Willwood in Powell, Wyo. Dixie always worked hard. She helped in the garden, rode the horses and spent time in town at her grandparents "big house." The Sheets cousins would "get in Grandpa's old grey Plymouth and drive all over the world sitting in one spot."
She met her sweetheart, Vernon Russell Olsen, while attending college in Powell. They married March 29, 1947. The couple tried farming, but Vern soon found his niche in the welding field. They began their family and eventually built a home on ten acres just outside of Powell on the Willwood.
Dixie raised a large garden and sold produce in the stores. She loved her church, horses, boating, fireworks, fun, and every person that crossed her path. But mostly she loved her family, always thinking of her husband, children and grandchildren. Vernon passed November 10, 1979. After his death she spent several years working at Hunnicutt Jewelry. After retiring she traveled to family events, keeping involved with every child, grandchild, and great grandchild. Dixie served for many years in the LDS temple in Billings, MT.
Dixie is survived by four children: Cindy Bechtold (Carl), Christie Krivanec (Karl), Cheri Becker (Steve), Cathy Whitlock (Brett), and one daugher-in-law, Jan Olsen. She is also survived by one brother, Charles S. Sheets, and a sister Janet Strait. She was preceded in death by her infant son, Gary Russell Olsen; husband, Vernon Russell Olsen; grandson, Jett Olsen; son, Jay Anthony Olsen; and sister, Beverly June Sheets.
Dixie was always on the go and advised her family to "carry on."
Funeral services in her honor will be held Friday, July 15, 2016 at 2:00 at the LDS chapel located at 525 West 7th St. in Powell, Wyomig.  The viewing will percede the funeral at 1:00.
Thompson Funeral Home is in charge of arrangements. Condolences can be sent to the family at www.thompsonfuneral.net or to P.O. Box 807, Powell WY, 82435.

To send flowers to the family in memory of Dixie Lou Olsen, please visit our flower store.
Send a Sympathy Card