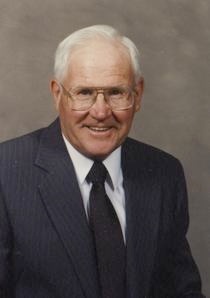 Funeral services for Donald Stanley (Don) Davidson, who died Thursday, June 23 at West Park Hospital in Cody, will be conducted at 10 a.m. Wednesday, June 29 at the First United Methodist Church in Powell.
The Rev. James Barth will officiate at services and burial in Crown Hill Cemetery.  Visitation will be held at Thompson Funeral Home from 6 p.m. to 7:30 p.m. Tuesday, June 28 and one hour prior to the funeral service at First United Methodist Church.
Don was born Aug. 7, 1923, on the family farm in Stanton County, Nebraska, the son of Axel C. and Lillian Kingsley Davidson.  An unforgettable event occurred in Don's life when he was 6 years old.  While working in a hay field, lightning struck and killed two horses, severely burned his father and rendered Don unconscious. Don remembered coming to on top of the two dead horses.
He attended rural school in Stanton County and graduated from Stanton High School in May, 1942. He was a member of the National Honor Society and attended Cornhusker Boys State.
Don worked on the family farm for a short time and then decided to attend Chilliicothe College in Missouri. After graduating, he began work in the oil industry with Stanolind Oil and Gas Company (now known as BP America) in Rangely, Colorado.
Don met Jeanette Ann Hanson while working in Dickinson, North Dakota. They were married at St. Joseph Catholic Church in Dickinson on April 12, 1956. They  spent 12 years in Midwest, Wyoming and were blessed with four sons and one daughter during that time.
Don enjoyed a challenging and exciting career of 36 1/2 years in the oil industry, working in a number of locations throughout the Rocky Mountain region, including Powell. Upon retirement in May of 1984, Don and Jeanette decided to make Powell their home.
During his early retirement years, Don remained active by participating in community activities, including the Hospital Planning Committee, Powell Medical Foundation, Target Powell Valley and the Wyoming Small Business Development Center. He also earned an accounting award from the Small Business Administration. Don was active in the First United Methodist Church and served on various church committees.
Don was a devoted husband, father and grandfather and was always interested in the accomplishments of his children and grandchildren. Don thoroughly enjoyed high school and college sporting events and attended games when possible. In later years, he enjoyed watching the Wyoming Cowboys and Nebraska Cornhuskers on television.
Survivors include sons Jeffrey of Houston, Texas, Steven of Powell, Stuart (Rebekah) of Silverdale, Washington and Jonathan of Salt Lake City, Utah; daughter Cynthia Lucas (Myron) of Garden Plain,  Kansas; five grandchildren; two brothers, Axel of Huntsville, Alabama and James (June) of Stanton, Nebraska; and one sister, LaVonne (Dale) Schellpeper of Stanton, Nebraska.
Don was preceded in death by his wife Jeanette, his parents and a sister.
In lieu of flowers, the family would appreciate memorial contributions to the Powell Medical Foundation or to the First United Methodist Church Foundation Fund of Powell.
To send flowers to the family in memory of Donald Stanley Davidson, please visit our flower store.