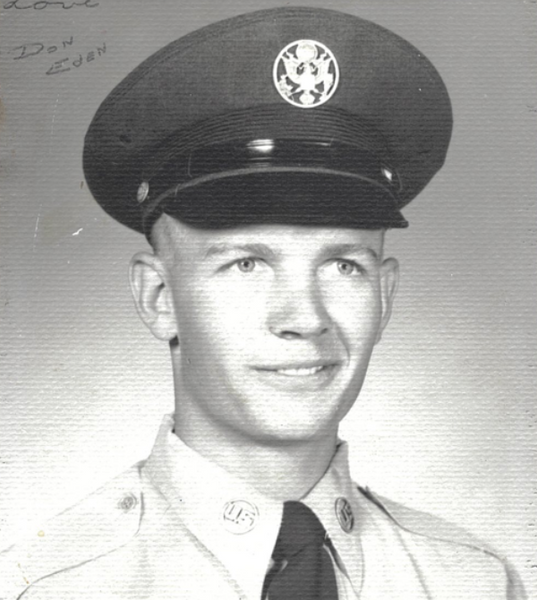 Early on the 24th of August 2021, Our Lord welcomed his faithful servant Donald to his eternal home. Donald Fred Eden was born on September 20, 1938 in Powell, Wyoming. He was the second child born into the family of Fred and Hildreth Eden and spent his childhood living on farms near Kane and Penrose, Wyoming. He attended Powell Schools and graduated from Powell High School in 1957.While not enamored by the academics of high school, he absolutely loved the sport of wrestling. He was quick to remind anyone, that he was a state champion when there was only one state champion in each weight class for the entire state.

After graduation, Don felt the call to serve his country and immediately
joined the United States Air Force where he gained knowledge in
electric power generation. He was stationed in France as a power
production specialist.

Don met the love of his life Ethel Jean “Jeanie” Mooren after returning
from France and they began his farming career. Together they farmed
in Willwood and Heart Mountain until settling northeast of Powell; on
the land they called home for over 50 years.

While farming was his livelihood, in his early years, hunting was his
passion. Many nights were spent sitting in the hallway of the Powell
Municipal Hall, with his brothers and cousin “Duffer”, waiting for that
elusive Badger Basin Antelope permit. He hunted moose in the
Thoroughfare, elk in the Sunlight Basin and Elk Fork, and drew one of
the first mountain goat permits for the Beartooth Range.

As well as farming, Don took advantage of his skills as a welder and
electrician; working for the Shoshone Irrigation District for over 23
years. He became head ditch rider and spent winters rewiring and
welding on the power generation plant near Ralston, Wyoming. It was
not unusual to see him setting in the building, schematic book in hand,
and yards of electrical wiring splayed out on the floor. If there was a
metal project, he would design, fabricate, and weld it together for his
farm, his family and his neighbors. He was completely at home in the
Big Horn Basin; being surrounded by family and friends.

A viewing will be held for family and friends on Friday August 27th
from 6-7 pm at Thompson Funeral Home. Funeral services will be
held on Saturday, August 28, 2021 at 10:00 am at the Presbyterian Church, Powell, Wyoming.

To send flowers to the family in memory of Donald Fred Eden, please visit our flower store.