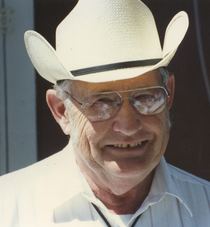 Don Stolts was born April 12, 1928, in Ismay, Montana. He died on May 1, 2016, in Powell, at the age of 88.
Don grew up on a ranch outside Miles City, Montana, and graduated from high school in 1942. He joined the Army, serving in Germany at the close of World War II and in Japan during the Korean Conflict.
He married Lorraine Schlenker on June 19, 1949, creating a bond that lasted for 66 years.
Don spent most of his working life as a meat cutter, retiring from Food Basket IGA as the head meat cutter.
He enjoyed his horses, cattle, going four-wheeling and spending time with his wife, daughters, grandchildren and great-grandchildren. He was involved in many service clubs and a proud member of the Union Presbyterian Church.
He was preceded in death by his mother Louise Zabel Stolts; father Paul Stolts; and his brother Howard.
Don is survived by his wife of 66 years, Lorraine; daughters Janet Burge (Ken Morgan) of Lovell and Debbee Cahill (Tim) of Lovell; grandsons Erik Burge (Vickie Heller) of Centennial, Colorado, and Scott Burge (Angela) of Cheyenne; and granddaughters Renee Brost (Britt) of Byron, Cherrece Jolley (John) of Lovell and Keisha Cahill of Lovell. Don is also survived by six great-grandchildren who love him and will miss him, like all of his family and friends.
Graveside services will be held Thursday, May 5, at 1 p.m. at Crown Hill Cemetery in Powell, with Dr. Jeff Baxter of the Union Presbyterian Church officiating.
Thompson Funeral Home is assisting the family with arrangements.

To send flowers to the family in memory of Donald Paul Stolts, please visit our flower store.
Send a Sympathy Card