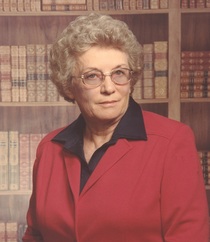 Donna I. (Martin) McNabb
Lovell, WY
Donna McNabb, aged 97, who was saved by Grace, fell asleep in Jesus on Saturday, April 2,
2016.
Donna was born March 11, 1919, to the late R. E. and Mamie Martin of Yale, Michigan. After
graduation from Yale High School in 1936, she attended the Port Huron Business College. In August
of 1940 she married her life-long love and partner, Kenneth T McNabb of Croswell, MI.
City girl no more! Dairy, hogs, horses, black Angus beef and a flock of chickens, along with
four kids to raise, became her way of life at 11794 Wilkes Road, Yale, Michigan. Eggs were delivered
to as far away as Detroit (about 60 miles). Still, she found time for china painting, joining the
Brockway Extension Club, Euchre nights with neighbors and playing the organ and sewing. Always,
she was able to delight everyone's taste buds with her cooking.
After Ken's death, Donna moved to Oskaloosa, Iowa, in 1978, where she joined the Church of
the Nazarene. There she was employed as an accountant by a government agency and was also hired as
a curator at a local art gallery. Out-living her many friends in Oskaloosa, she moved to Cody, WY.
There she became a church organist for the Hillcrest Church and also worked as a seamstress. In 2007,
she moved to Bradenton, Florida where she lived unassisted in her residence until age 95. In 2014,
Donna moved back to the Wyoming she loved so much.
The day following her 97th birthday, she sat at the double key-board organ at the home of her
daughter, Ann, and flawlessly played, â€œWhen Irish Eyes are Smiling,â€ â€œEaster Paradeâ€ and â€œHere
comes Peter Cottontail.â€ She played them all by memory.
Donna is survived by two sons, Kurt T (Lavonne) of Clark, WY and Jeffrey K. (Caroline) of
Delta Junction, AK, a daughter-in-law, Clara Margaret, â€œGinger,â€ of Lexington, MI, and a daughter,
Ann E. McNabb-Perkkio of Cody, WY. She is also survived by a step-brother, Elwin Graham of Port
Huron, MI, a step-sister, Mary Atkins of CA, fourteen grandchildren, 23 great grandchildren and 5
great great grandchildren.
She was preceded in death in 1928 by her mother, Mamie Martin; in 1971 by her loving
husband, Kenneth; her father, R.E Martin & step-mother, Elsie Martin of Yale, MI; a son; Gareth McNabb; a brother, Edgar Martin of Port Huron, MI; step-brother, Dorlan Graham of Flint, MI; two sisters, Eileen Bricker (Stanford) of Yale, MI; and Bernice Hinton of Saginaw, MI. She was also preceded in death by one grandson, infant McNabb of Powell, WY, and one great grandson, Tyler James Bentley of Powell, WY.
Funeral services will be held on April 21 at 2:00 pm at the Kaatz Funeral Home of Yale, MI
with Kurt McNabb officiating. Internment will be in the Elm Wood Cemetery, Yale, MI.
To send flowers to the family in memory of Donna McNabb, please visit our flower store.
Send a Sympathy Card