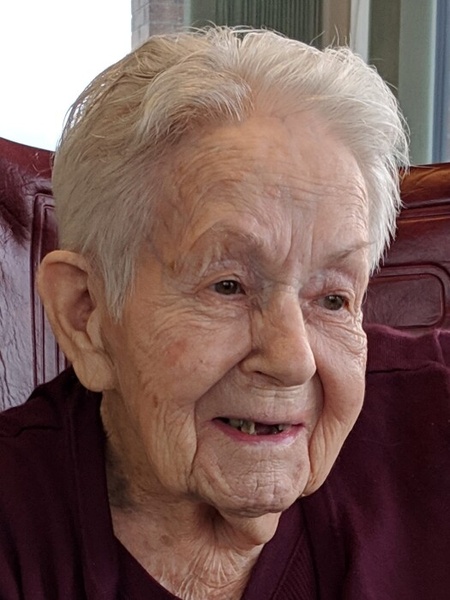 Dorathea (Mugrage) Parsons passed away peacefully in Powell, WY on February 2, 2021 just 12 days before her 95thbirthday.  She had been a resident at the Powell Long-term Nursing Center for the past 3½ years and was in the Crook County Nursing Home for 3 years prior.

Dora was born in Kremmling, CO on February 14, 1926 to William and Ineila Mugrage, the second of eight sisters and brothers.  She was raised around that area and graduated from Kremmling Union High School in 1944.  She married her classmate, Charles T. (Chuck) Parsons in August of 1946, soon after his discharge from the U.S. Navy.  They began their married life on the family ranch north of Kremmling where their first son, Robert (Bob) Parsons was born in December of 1947.  They moved to Gunnison, CO where Chuck attended Western State College and got his teaching degree.  Their second son, Charles (Ted) Parsons, III was born in September of 1950.  From 1952 through 1957, Dora’s family lived in Dove Creek and Hayden, CO where Chuck taught.  Every summer was spent back at the family ranch where Dora worked parttime as a teller in the Kremmling Bank.  In the Fall of 1957, Chuck began teaching in Wheatland, WY where they would live until Chuck’s passing in November of 2001.  Dora worked as a bank teller and supervisor until her retirement in 1991.  Dora loved traveling and she and Chuck trekked over much of the United States including Alaska in their motorhome.  They also traveled to Europe to visit Chuck’s brother.  She adored visiting her two children and four grandchildren as well as going on family hunting trips.  She was a member of the Women of the Moose and VFW Auxiliary.  Dora was also a Christian and a member of Grace Point Church in Powell. Her hobbies included bridge, knitting, crocheting, reading, and trying new recipes.

Dora is survived by her sons and their families: Bob and Kathy Parsons of Powell, WY and Ted and JoEllen Parsons of Hulett; her grandchildren are Jennie (John) Tietema of Seattle, J.R. (Kate) Parsons of Memphis, Joseph (Cheena) Parsons of Saratoga, and Chelsea (Cooper Elwood) Parsons of Missoula; her greatgrandchildren are Jack, Hayden, Booth, Ellie, Carrigan, and Jackson.  Other survivors include in-laws, nieces and nephews whom she loved dearly.

Dora was proceeded in death by her husband and all her seven siblings.

The staff of the nursing homes have always expressed what a wonderful lady Dora was and how much they loved caring for her.  She will be greatly missed by family and friends.

To send flowers to the family in memory of Dorathea Parsons, please visit our flower store.