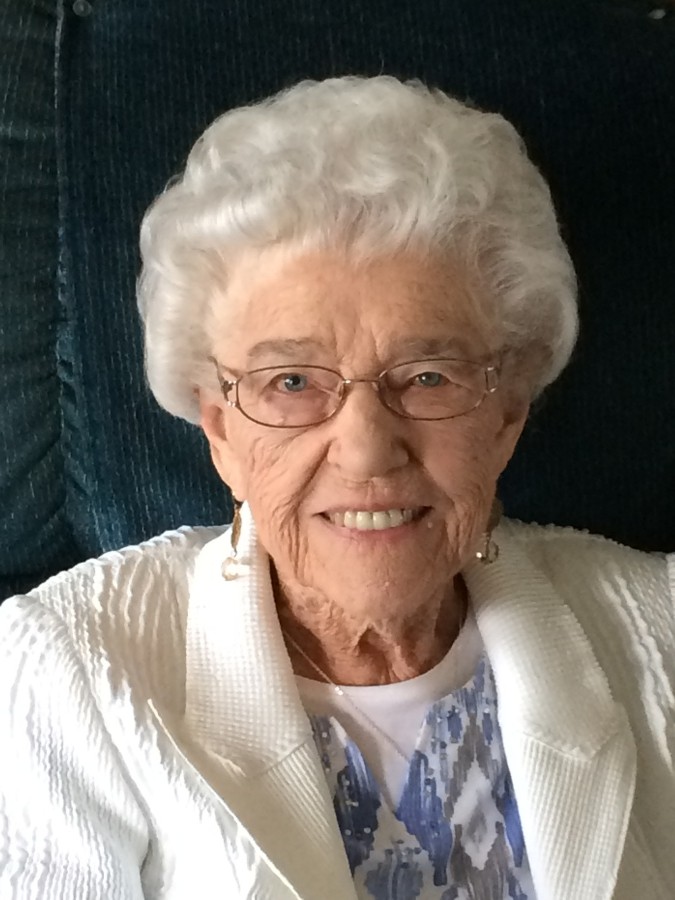 Doris Gernant, age 95, went to her eternal home on July 8, 2018. She passed away at Powell Valley Care Center, where she had lived the past several months.
Doris was born Feb. 23, 1923, in Garner, Iowa, a daughter of Alvina (Bohn) Hollatz and Otto Hollatz. She was baptized March 25, 1923, at St. John’s Lutheran Church, and reaffirmed her baptismal vow May 5, 1935, with the rite of confirmation. She was a lifelong member of the Lutheran Church — Missouri Synod. She loved her work with the church, taught Sunday School for many years, and was an active member of the Lutheran Women’s Missionary League, serving as a district and zone officer in the past.
Doris had her schooling in Garner, Iowa, graduating from Garner High School in 1940. She did office work in that area and went to Kansas City, Missouri, to work in 1945. While there, she met Otto Gernant and they were married in Garner, Iowa, on June 23, 1946. They had 55 years together before Otto died in 2001. After they married, they came to Wyoming and lived at Emblem where Otto farmed. At that time, Doris was active in Extension Homemakers and also spent many years as a 4-H leader. When Otto retired in 1982, they moved to Powell. Doris remained busy with her church activities and volunteer work at the Powell Valley Care Center.
She was preceded in death by her husband Otto; her daughter Kathleen; and her brother Clayton Hollatz.
She is survived by two sons, Howard (Carol) of Greybull and DuWayne of Longmont, Colorado; one daughter, Fern McLaughlin of Tucson, Arizona; seven grandchildren; nine great-grandchildren; one sister, Etta Allen of Overland Park, Kansas; one sister-in-law, Joan Gernant of Albuquerque, New Mexico; and numerous nieces and nephews.
Funeral services are to be held July 12, 2018, at 10:30 a.m. at Immanuel Lutheran Church in Powell, with interment at Emblem Cemetery to follow at about 1 p.m.
Memorials can be given to LWML or Immanuel Lutheran Church in Doris’ memory.
Thompson Funeral Home is in charge of arrangements. Condolences may be sent to the family online at www.thompsonfuneral.net or to P.O. Box 807, Powell WY, 82435.

To send flowers to the family in memory of Doris Gernant, please visit our flower store.
Send a Sympathy Card