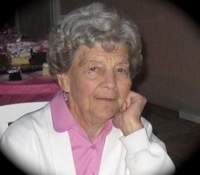 Dorothy Imogene Oswald Kylander Borud
Dorothy I. Kylander Borud, 93, died September 6, 2013, with her family by her side  at West Park Hospital in Cody, Wyoming.
She was born on November 10, 1919 in Hollenberg, Kansas to Fred and Nina (Hall) Oswald. She graduated from Hollenberg/Morrowville High School and then moved to Powell, Wyoming in 1937. She married Emil A. Kylander in 1938. She graduated with a B.A. degree in teaching from Eastern Montana College (MSUB) in Billings, Montana. She then taught 1st grade at Eastside Elementary School and Parkside Elementary School in Powell, Wyoming for 25 years, retiring in 1981. She lived in Powell, Wyoming and spent winters living in Apache Junction, Arizona.
On October 4, 1991 she married Darrell Borud in Billings, Mt.
Her interests included playing cards, playing billiards and working crossword puzzles. She attended Hope Lutheran Church in Powell, was a life member of Elks Club and was a member of Eastern Star.
Dorothy is survived by her husband Darrell of 22 years; son Ted Kylander (Diane) of Billings, MT. ; daughter Trudi Brooks (John) of Thermopolis, WY. ; step-son Kevin Borud of Kenmare, N.D.; two sisters, Wilma (Billie) Allerheiligen of Cody, Wyoming and Maxine Heckman of Mount Holly Springs, PA.; and four grandchildren, Torry Kylander, Trevor Kylander, Evan Brooks (Michelle) and Ethan Brooks; five step-grandchildren, Roger Borud, Christie Borud, Matt Borud,Stephanie Snider (Jon) and Erik Hansen (Jennifer); two great grandchildren, Hayden and Kylee Brooks; and five step-great grandchild, Brenley Borud, Kyler and Bridger Hansen and Logan and Lola Snider.
She was preceded in death by her parents, her brother Donald Oswald and her sister Elldeen (Oswald) Brown.
Cremation has taken place at Thompson Funeral Home in Powell, Wy. A memorial will be held at a later date.
In lieu of flowers it is requested that a contribution be made to a memorial fund in Dorothy Kylander Borudâ€™s name with the Powell School Foundation. Please signify that the contribution is to go to her memorial. The funds generated will be used to purchase library reading books and materials for both students and teachers at Park Side School.
Please send your contribution to the Powell School Foundation, % Mary, 160 N. Evarts Street, Powell, Wyoming 82435
Memorial services will be held on Thursday, Sept. 26, 2013 at 11:00 am at the Northwest College house on College Drive. the address is 550 College Drive. interment will follow at the Crown Hill Cemetery
To send flowers to the family in memory of Dorothy I Borud, please visit our flower store.