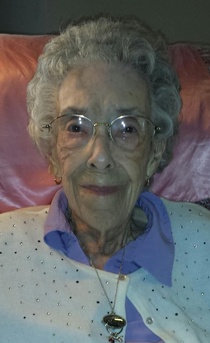 Dorothy May Gibson Hedrick was born on June 23, 1918, in the county of Johnsonville, Illinois. She was born to Harry R. Gibson and Lucy I. Williamson Gibson.
Dorothy grew up in the town of Mount Erie, Illinois. Her parents owned a small restaurant/gas station which she worked at most of her growing up years.
She met Wesley W. Hedrick there at that store and they married April 18, 1937, in Fairfield, Illinois. Dorothy and Wes worked in the state hospital in Manteno, Illinois. Â
Dorothy worked as a nursing assistant and Wes as an orderly. They were blessed by the birth of their son, James Michael while there.
In 1944 they moved to Wyoming to help her parents operate a gas station in Greybull. They then moved to Powell after a while. In 1945 Wesley went in to the Army.Â  Dorothy got a job as a telephone operator at the switchboards until she and little Jimmy joined him in Washington at Fort Lewis. They returned to Powell after Wes was discharged from the Army. Dorothy took a job at the seed house here in Powell.Â  Following that she worked at the Powell Hospital as a nurseâ€™s aide. They homesteaded in 1947 on Heart Mountain Relocation area. She continued to work at the hospital nights so she could help on the farm during the days. She sold eggs and cream, and sold chickens for extra income for their family. Born during those years were daughters, Mary Sue and Nancy Marie, gifting little sisters to big brother, Jim.
She joined the Assembly Of God Church in 1948 and there held many offices. Dorothy played the piano for three services a week,Â SundayÂ School Teacher, Childrenâ€™s Church Leader, Womenâ€™s Ministries President, Secretary/ treasurer on the church board for years. By serving in these positions through the many years she showed her dedication to her Lord and their church.
She and Wes worked together on their farm for 50 years and because of Wesâ€™ declining health moved into Powell. Wes passed on to be with his Lord in October of 2003. She continued to live at home until she was 90 years old, then because of health reasons she moved to the Powell Valley Care Center.Â  At age 95 she found treatment for her anemia and her daughter sprung her out of the care center and into the Heartland Assisted Living, where she lived for two years. She met many friends and new employees there until a fall caused her to re-enter the care center again December of 2014. She resided there until her final journey to heaven, October 17, 2016.
She is survived by her son, James Michael Hedrick, daughters, Mary Sue Larsen (Jerry) and Nancy Marie Rossner (Cal), her brother, John O. Gibson (Beverly); grandchildren: Colette Meyers (Carl), Cindy Sapp (Stan), Larry Larsen (Christy), Susan Stambaugh Larsen, Daniel Larsen (Tracy), Tracy Gates (Brandon) and 17 great-grandchildren and 5 great-great-grandchildren.
A service will be held at the Glad Tidings Assembly of God Church at 777 7th St. Powell onÂ Friday, Oct. 21 at 10 a.m.Â with Pastor Mike Walsh officiating.
Dorothy was the Pillar of Strength and Prayer Warrior of the family and she will be greatly missed.
To send flowers to the family in memory of Dorothy May Hedrick, please visit our flower store.
Send a Sympathy Card