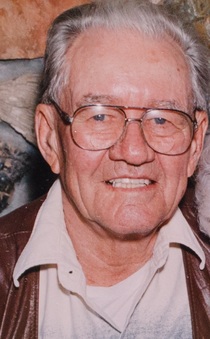 Earl E. Jones, 96, passed away peacefully on December 15, 2015, at Powell Valley Care Center. Earl was born October 2, 1919, in Powell, WY to Harley and E. Marie Jones. He was the oldest of five children. Earl attended and graduated from Powell High School in 1937. He met his lifelong love, Opal Royal, and they were married on January 16,1940, in Billings, MT. Earl and Opal celebrated 72 wonderful years together before her passing in 2012. To this union were born three children, Ron, Terry and Janice.

Earl farmed his entire life on the east side of town and did carpentry work in the winter. During his spare time, he managed the Park County Fair for many years, was a member of Masons, Eastern Star, Lions, Elks, Toastmasters, Wyoming Fiddlers Association, the Travelers and a 50 year member of the Union Presbyterian Church, where he and Opal sang in the choir. A talented musician, who could play entirely by ear, Earl loved and shared music with everyone and could play any instrument he picked up. He played in a band at local dances, entertained at Jack's Lounge for several years, and with Roy Barnes. During his retirement, he enjoyed playing at the Senior Citizens Center and the Care Center.

Earl raised Tennessee Walking Horses and was a charter member of the Powell Valley Riding Club. His love of the outdoors took him on many adventures including hunting, camping, fishing, pack trips, snowmobiling, water and snow skiing, motorcycle riding and traveling the entire United States in their RV.

Earl had a story and a song for every situation and will be missed by all who knew and loved him.

Services will be held at the Union Presbyterian church, January 8th at 10:00am

To send flowers to the family in memory of Earl E Jones, please visit our flower store.
Send a Sympathy Card