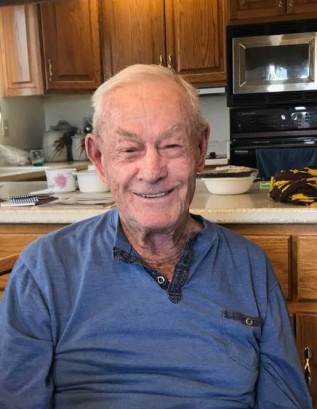 Earl Meeker passed away on June 18, 2019, at his home in Powell, surrounded by his four children, caregiver Cristy Lopez Deroche and granddaughter Melissa.
Earl was born at his parents' home in Lovell on Oct. 18, 1923. He was the second child of seven born to Steve and Clorous Shumway Meeker.
He attended Lovell schools and was a standout basketball and football player. He went on to play basketball at Northwest Center for Louis Kohnke. He was in the third graduating class.
Earl served his country from 1943 to 1946, in the Navy Air Corps in the Pacific Fleet Air Force. He flew in bombing runs out of Clark Airfield in the Philippines with Bombing Squadron 119. After the war, he worked 42 years for Marathon Pipeline Company in Powell, retiring in 1990.
Family activities and especially hunting arrowheads with all of his family was the center of his early married life. There were many trips to Little Mountain, picnicking and enjoying the mountains with family members and their children. Earl was a strong, yet kind and generous man who provided a great role model for all who knew him. He enjoyed hunting, fishing, cutting firewood and working outside in his yard.
He was preceded in death by his parents; brothers Steve, Wes, Larry, and Bob; and an infant sister, Meta, who died shortly after birth. The love of his life, Fern Marie (Fales) Meeker, died Oct. 8, 2014, after nearly 66 years of marriage.
Earl is survived by his sister Betty Ann Holyoak of Salt Lake City, Utah; and his children Paula Meeker of Billings, Montana; Wes Meeker of Powell and Emblem; Mike (Dale Ann) Meeker of Powell; and Sheri (Randy) Gallagher of Phoenix, Arizona. He has seven grandchildren: Ryan, Josh, Melissa, Alycia, Jennifer, Nick and Keoni; and eight great-grandchildren: Kingston, Aliya, Scarlett, Kenai, Coralee, Maddox, Brody, and Knox.
Graveside services are set for Thursday, June 27, at 11 a.m., at the Crown Hill Cemetery with military honors. A reception will follow at The Commons in downtown Powell.

To send flowers to the family in memory of Earl Meeker, please visit our flower store.
Send a Sympathy Card