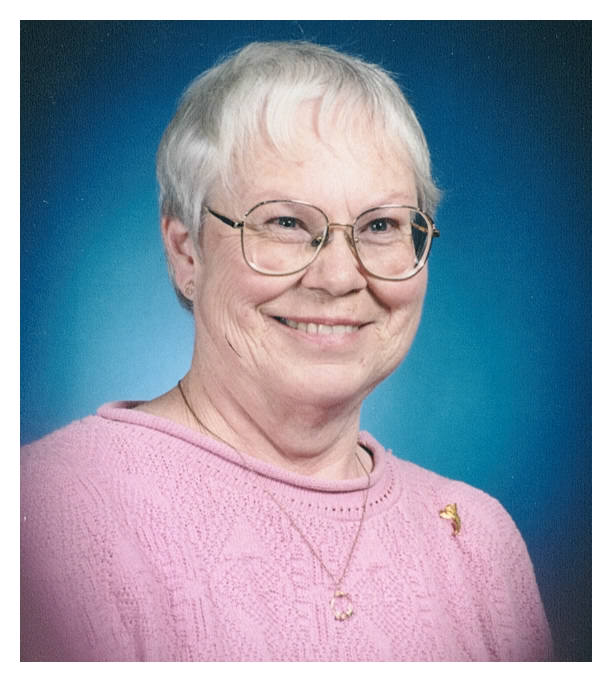 Edna Mae Harvey Daugherty left this earthly life Friday, April 5, 2019 to join her family in Heaven. She was born November 20, 1937 in Midwest, Wyoming to Rolland A. Harvey and Helen Hibler Harvey, completing the family of brothers, Robert, Rolland, George and sister, Donna. Being the last to arrive, she was the last to leave, with all of her immediate family proceeding her in death.

When she was 9 months old the family moved from Midwest to Elk Basin and then in 1953 the family moved to Powell.  Edna graduated from Powell High School with many friendships that have continued throughout the rest of her life.

On June 2, 1967, she married Carl Eugene Daugherty and moved with him to Miles City, Montana, where she was a dispatcher for the police department.  Carl was employed as a Miles City fireman, retiring in 1975. Carl and Edna returned to Powell, living in the Willwood area and later moving into town where Edna remained until her passing.

Returning to Powell, Edna was again a dispatcher, working for the Powell Police department. After her retirement there, she worked for several years as an Activity Assistant at the Powell Valley Care Center.

Edna was never blessed with children of her own, but gave all her motherly love to her sister Donna’s two boys when she became unable to care for them. Edna considered Glenn and Rodney Scheeler as sons, rather than nephews.  In 1975, Edna’s heart was broken when Rodney was killed in an oil rig accident. When Glenn married Coleen Lewis and began to have a family, she acted as “Grandma” never forgetting birthdays and attending all the kid’s events and family gatherings.

Edna had a great love of animals, taking in many stray dogs and cats during her lifetime. She was never without a pet in her home and loved them as if they were her children. She even nursed a baby bunny back to health before letting it go, returning daily to the release area to check up on it until she knew it was ok on its own.

In July, 2008, Carl passed away, leaving Edna alone for the first time in 41 years. She kept busy with friends and family, playing the lotto (she knew she would win one day and share it with everyone), watching horse racing on TV and some traveling to see extended family.

The last several months brought a decline to Edna’s health, both physically and mentally. It upset her that she could no longer do all the things she wanted to do on her own. Glenn, Coleen, children and grandchildren did everything they could to assist her to remain in her home.

Edna passed away on Friday, April 5th, 2019 in her home. She is survived by many nieces, nephews and cousins including Special Nephew, Glenn and wife Coleen Scheeler, their children Chris with his children, Tristan, Trayton, Ava, Tatum, Trevin and Adalyn; Cara and husband Dennis with her children, Caden, Chasnee, Chareasa and Carstyn; Craig and wife Tiffani with their children, Mckenna, Jackson and Chloe; Clayton and wife Justine with their son, Grady. Edna will also be greatly missed by many close friends and her four legged companion, Roxie.

Edna was proceeded in death by her parents, her husband, Carl,  siblings, two special nephews, Rodney Craig Scheeler, and Chris’s son, Tanner William Scheeler. Also at heaven’s gate to greet her were friends, Betty and Mary.

Per Edna’s wishes, cremation has taken place and services will be held on Friday, April 12th at 2 pm at the First United Methodist Church in Powell. In lieu of flowers, Edna would love for your donation to the animal shelter in her name.

To send flowers to the family in memory of Edna Mae Daugherty, please visit our flower store.
Send a Sympathy Card