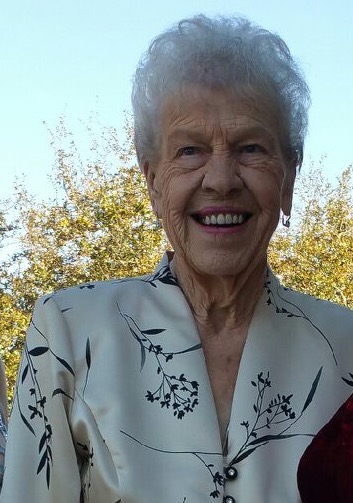 Ella Mae Sievers transitioned peacefully to her heavenly home on September 26, 2020. Ella Mae Cecelia Yohon was born at home on the farm in Yates Center, KS on December 30, 1934, to Marie Isabelle (Massoth) Yohon and Peter Joseph Yohon. She lived her entire early life there, graduating from Yates Center High School in 1952. Later, she met Merle Loren Sievers through her sister, Julie and her husband Sonny Sievers, who happened to be Merle’s cousin. So.....sisters married cousins, and immediately following their wedding on April 28, 1955, Merle and Ellie moved to Casper WY. Their first daughter, Cynthia Suzanne, was born in 1957 followed by Jane Marie in 1960. The family moved to Powell WY in 1967 and spent many happy years on seven acres outside of town. When Merle retired, they moved to Grandview Estates where Ellie resided until moving to the Powell Valley Care Center for a short two and one half weeks before her death.

Ellie was known for her ready smile, and fun-loving way. She was a wonderful daughter, sister, wife, mother, grandmother, great-grandmother, and friend. She was a hard worker, meticulous house keeper, fabulous cook, dedicated 4-H leader, great bowler and card player and someone you could always count on. She loved jig saw puzzles and watching the Game Show Channel. She was an avid sports fan and loved watching the Denver Nuggets, Colorado Rockies, and, depending on her mood, sometimes the Denver Broncos, however she was known to bet against them occasionally! She was a member of St. Barbaras’s Catholic Church, The Powell Does, The Eagles Auxiliary, The Powell Senior Center, The Powell Hospital Auxiliary, and President of the Grandview Homeowner’s Association. She was always quick to volunteer for whoever needed help.

She was preceded in death by her parents, her husband, Merle, her daughter, Jane, her sister Mildred, and her brothers Robert and Eugene. She is survived by her daughter, Cyndi Miller and fiancé, Rick Heyden, granddaughter Allison Phair (Glenn), grandson Dallas Miller (Chesley) all of New Braunfels TX, granddaughter April Christensen (Colby) and grandson Loren Dyas (Yentle) all living in Nebraska, and her sister, Juliana Sievers of Yates Center KS. She was blessed with nine treasured great-grandchildren, Emory and Regan Christensen, Maddisun, Mackenzie, Lillian, and Chase Dyas, Rex and Iylee Phair, and Ford Miller. We will all miss our Granny very much. She was our family’s shining light and our loving memories of her will never fade.

In lieu of flowers, memorials in Ellie’s name may be sent to the Powell Senior Center Building Fund, P. O. Box 1156, Powell WY. Ellie would have been very happy to know that she had a part in a new building for fellow Powell Senior Citizens to enjoy.

We would like to thank all the doctors, nurses, CNAs, nursing students and support staff at the Powell Hospital and the Care Center. Mom was treated with such dignity and compassion by each and every person who cared for her. During her last days at the hospital, the staff had begun to refer to Ellie as “The Queen”, an honor in which she took great delight! Not enough can be said about Powell’s medical community and their willingness to bend over backward to make Ellie’s last days as peaceful as possible. We are forever grateful to you all.

A rosary for Ellie will be held at St. Barbara’s Catholic Church on Sunday, October 4, at 7:00 p.m. and services will be at St. Barbara’s the following day, Monday, October 5, at 10:00 a.m. with burial to follow. Ellie will be laid to rest beside Merle and Jane at Crown Hill Cemetery in Powell WY. Thompson Funeral Home is in charge of arrangements.

To send flowers to the family in memory of Ella Mae Sievers, please visit our flower store.
Send a Sympathy Card