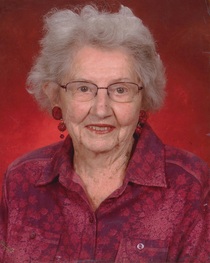 Erma Hillman died peacefully at the Powell Valley Care Center April 5, 2016. She was 99.
Erma was born on Dec. 24, 1916, in Clyde, Kansas, to Charles andÂ Maude OelkersÂ Rogers. She moved with her family to a farm near Wakeeney, Kansas, when she was 3 years old, where she lived until she was a senior in high school. Erma graduated from Trego Community High School in 1934.
She married Oscar Hillman in Ellsworth, Kansas, on Jan. 1, 1936, during the Depression and Dust Bowl days. They moved to Worland in March 1936, and that is where their two children, Gary and Karen, were born.
They purchased the Hillman Implement Company in Powell in 1945 and until they retired in 1967, Erma worked as the companyâ€™s bookkeeper for over 20 years.
She enjoyed playing golf, bridge, traveling and being a stay-at-home mother.
Erma was a 70-year member of the United Methodist Church in Powell, served on the board, was past president of Chapter P in PEO. She also was a past guardian ofÂ Jobs Daughters, served as secretary of the Powell Country Club and a member of Tee and Tan for several years. She was also a member of Alycone Chapter Eastern Star.
Erma is survived by her son Gary (Linda) of Sheridan; five granddaughters; two grandsons; 13 great-grandchildren andÂ 5Â great-great-grandchildren. She is also survived by her brother, Bill Rogers.
She was preceded in death by her husband Oscar, who died on Aug. 1, 2000, and her daughter, Karen Benton, on March 10, 1993. She also was preceded in death by her parents; sisters Mildred Gammon, Faith Rhoades,Â Ruth Corcoran,Â Betty Rhoades and Jean Bottger; and brothers Bud and Verne Rogers.
Cremation has taken place, and there will be a service at a later date.
Memorial donations in Ermaâ€™s name can be made to the United Methodist Church in Powell or a charity of your choice.
Thompson Funeral Home is in charge of arrangements.
Condolences can be sent to the family atÂ www.thompsonfuneral.netÂ or to P.O. Box 807, Powell WY, 82435.

To send flowers to the family in memory of Erma Irene Hillman, please visit our flower store.
Send a Sympathy Card