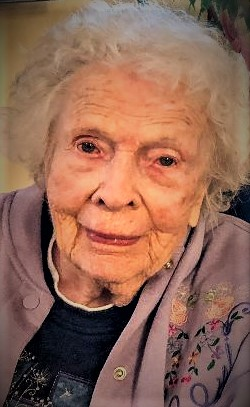 Ethel Edmonds Gerard, age 102 11/12ths, passed away peacefully having dictated her obituary and planned one last family gathering. Ethel was born in Thermopolis, WY  in 1919 to Scottish immigrants Barbara and CB, “Scotty,” Edmonds.  The family followed Scotty through the oilfields to Billings, MT eventually settling in Cody, WY where Ethel completed high school in 1937.

Although her father joked that she attended every school in the county, Ethel was a college graduate in an era when few women even attended college.  She attended University of Wyoming and Eastern Montana Normal School accruing a two-year teaching certificate.  She taught in a one-room school in Sunlight Basin where she stoked the wood stove in the mornings and fished on her walk home. (The building still stands and is visible on the west side of the Sunlight Creek Bridge.)  During the war, Ethel worked in Chicago as a typist for V-Mail-–a program designed to reduce the physical mass of mail to and from soldiers stationed overseas.  V-Mail letters were written on a special form, photographed into microfilm, transported across the world, and then reproduced and delivered to the individual recipients.  Ethel’s job was to type those bits of the letters which were cut off in the filming process, providing her a uniquely personal view of the human stories of WW2.  After the war, the Hart Mountain Relocation Center was dismantled and Ethel’s typing skills were put to use typing the catalog of all the bits and parts that could be distributed elsewhere.  Ethel’s final government job was to drive a truck to Texas, where she joined her sister and nephews, completing her bachelor’s degree at the University of Texas at Austin. Social security cards had just come out, and in those days they listed occupation.  She enjoyed the responses of others seeing this pretty little blonde listed as a "truck driver."

Ethel married Foard Gerard in 1947 and honeymooned in Yellowstone Park. They lived briefly in Cody and Byron, WY, but spent most of their years in Powell, WY.   Always fond of the park, the couple were frequent Park visitors and kept a boat on Yellowstone Lake for many of their retirement years.  Together, they owned Foard’s Plaza Liquor in Powell for many years.

Ethel enjoyed raising her four children and was always involved in their activities.  She helped with Boy Scouts, was a 4H leader, and served as Neighborhood Chairman of the Girl Scouts long after her scout had graduated.  Ethel helped her daughters sew costumes for the high school plays “Brigadoon,” and “Fiddler on the Roof.”

Ethel always found a way to serve her community.  Ethel was a member of Eastern Star and served on the board of directors for the hospital foundation and the local day care. When the day care couldn’t afford new crib sheets, she found sheeting at thrift stores and personally sewed sheets for each of the facility’s cribs. She was active in the Presbyterian Church and had leadership roles in the local Presbyterian Women’s group, EPASC, and PEO. She always had a basket to raffle at the Presbyterian Bizarre. She made hundreds of baby quilts for the Linus Project that were donated to church projects overseas as well as to child protection and rescue services in at least four different states.  Ethel always followed politics and was an election judge for nearly 50 years. Even after her vision loss prevented her from reading people’s IDs, Ethel joined in, serving coffee and cookies to the rest of the crew.

Ethel’s hobbies included golfing, playing bridge, camping and fishing, sewing, a wide variety of crafts, rock collecting, silversmithing and basket making.  She made so many baskets, her kids joked they all had three baskets in every room of their house.  More than anything, Ethel enjoyed having homemade gifts for her family and friends.  Long after she could make them herself, Ethel made certain her children continued to provide baskets, sewing projects, and crafts to give to friends and those who helped her.  Ethel will long be remembered both for her generosity and her ability to get others to do what she wanted.

Even more than having gifts for others, Ethel enjoyed her family and friends.  While she always encouraged her children to grow their wings and fly, she cherished the times they came back to the nest.  She loved planning family gatherings but was equally happy to enjoy a Sunday drive. She adored time with her children, niece, nephews, grandchildren and great grandchildren.   Her circle of friends was always expanding. She held lifelong friendships with her schoolmates and continued to collect new friends as she moved from home, to retirement center, to assisted care and the care center.  Ethel was always happy to see you.

You will be missed and your memories cherished.  “I love you, I love you.  Good bye, good bye.”

A Memorial Service will be held on Saturday, August 13, at 10:00 am at Union Presbyterian Church in Powell.

In lieu  of flowers, please consider a donation to Union Presbyterian Church of Powell or to the Charity of your choice.

To send flowers to the family in memory of Ethel Gerard, please visit our flower store.