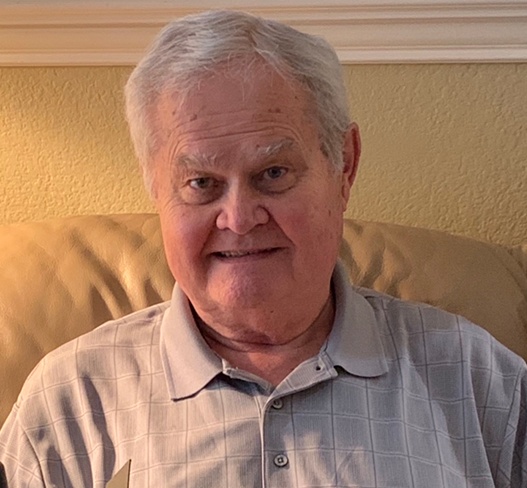 Eugene (Gene) William Montgomery, fondly known as Sonny or Good Buddy to his grandkids, passed away Tuesday, July 19, 2022, at 77 years of age.  He died at his home in Flower Mound, Texas, from untreatable complications of low blood sodium, following a hospital stay. He was lovingly cared for and surrounded by family along with his faithful dog of 8 years, Sassy.

Gene was born August 4, 1944, to Eugene and Wilma Montgomery in St. Louis, Missouri. His family moved to Wyoming when he was in first grade.  Sonny was the oldest of four brothers: Tom, Jon, and Todd.  Gene and Ella Mae Ray were married on May 29, 1964, in Powell, Wyoming. They attended the University of Wyoming, where Gene graduated in 1966 with a B.S. in Civil Engineering and with a Masters in 1968.  Gene and Ella had their first daughter, Cynthia, in Laramie, Wyoming in 1967, and their second daughter, Debra, in Anacortes, Washington in 1969.

Gene worked in the oil and gas industry for 40 years, moving multiple times across the United States and retiring in January 2008.  His career took him to Wyoming, Washington, California, New Mexico, Louisiana, and five cities in Texas. Gene worked for Shell Oil Company for 29 years.  The first 14 years with Shell focused on downstream refining and chemicals, then later moved into E&P operations.  Gene was the Superintendent for Shell's West Texas Operations, the Manager of Health and Safety, and the Regulatory Affairs Advisor for Shell Western E&P.  Gene joined Altura during the company’s formation in March 1997, and continued to work on regulatory issues in Texas and New Mexico.  Gene served 14 years as Chairman of the Texas Oil & Gas Association's Regulatory Practices Committee (RPC). In addition, he was a member of the New Mexico Oil & Gas Association RPC and the Permian Basin Oil & Gas Association Legislative and Regulatory Committee.  He served 10 years on the Llano Estacado Regional Water Planning Group and served from 2007-2013 on the Texas Water Development Board at the Texas State Capitol in Austin. Gene became the External Affairs Director for Oxy Permian Ltd. before retiring.

Buddy was a kid at heart; he loved toys, projects, and dessert first. With his four grandchildren— Vivien, Emily, Eric, and Vincent—he enjoyed things like flying huge kites, remote control airplanes, root beer floats, and was always helping with Scouting projects and school fundraisers.  He was a math and science tutor for the grandkids, always trying to convince them that "math is fun!" He loved Braum's frozen yogurt and driving his 1967 Dodge Polara convertible.  He was a man who showed love in his actions. He was always there when something needed to be fixed, leaving us with the motto, "if Buddy can't fix it, nobody can."  Always loving a challenge, he liked building, tinkering, puzzles of all kinds, and was a computer whiz. After retirement, he looked forward to Wednesday lunches with his friends and never minded volunteering his time to help others. Gene enjoyed being the President of the Lions Club in Anacortes, WA, and President of the Chamber of Commerce in Denver City, TX, always serving with his incredible booming laugh and a generous spirit.

In honoring his requests, there will be no local service. Our precious Husband/Daddy/Buddy/Brother will be laid to rest in our families' dedicated plots at the Crown Hill Cemetery in Powell, Wyoming overlooking Heart Mountain.  His family will come together to celebrate his life at a later date.   In lieu of flowers, donations may be sent to The Powell Valley Fire Department. Checks can be mailed in his honor to the attention of: Kenny Skalsky, Administrator at 1011 East South Street, Powell, WY 82435.

Yes, we are of good courage, and we would rather be away from the body and at home with The Lord.

The loss is immeasurable but so is the love left behind.

To send flowers to the family in memory of Eugene W Montgomery, please visit our flower store.