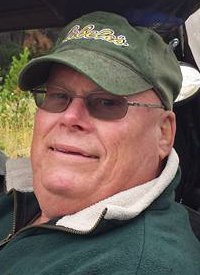 A major light and purveyor of humor of the Onstine family was extinguished on Dec. 18, 2020, at Powell Valley Hospital with the death of Eugene Onstine of Powell.

Eugene was born to Fred and Norma (Elder) Onstine on March 24, 1943, in Powell. He graduated from Powell High School in 1961, where he often changed the oil and serviced his teacher’s automobiles (anything to get out of class). He was a hands-on student and utilized those skills throughout his life.

On Feb. 20, 1964, he married the love of his life, Carolyn Kay Sanders in Idaho Falls, Idaho. They were later sealed for time and all eternity in the Logan, Utah, Temple. Their love for each other spanned 56 years and manifested itself in the birth of four children: Cindy, Wendy, Randy and Victor. He was an active and devout member of the Church of Jesus Christ of Latter-day Saints.

Eugene owned a service station on Bent Street in Powell prior to working at the Powell Ford dealership where he was a parts man. He took those skills, along with his family, to Sacramento, California, in 1974, to be a parts man at a Ford dealership until he retired and moved back to his hometown.

Eugene loved anything with an engine, and preferably inside a Ford. He spent countless hours working on or helping others with their car repair needs. He loved working on cars.

He was a dedicated husband and father who worked very hard to provide for his family. His work ethic was incredible, and he passed that down to each of his children, and anyone else who would listen to his advice. He taught his children to be honest, responsible and to always do what is right, and his love and support to his children and grandchildren were always at no expense or compromise. There is no doubt that he loved us ALL very much.

After retirement, Eugene and Kay found great enjoyment in being camp hosts at campgrounds on the North Fork of the Shoshone around the Pahaska area. They both loved camping. Eugene was always interested in people and enjoyed conversations with those who stayed in the campground.

Eugene is survived by his wife Kay; sons, Randy Onstine (Amber) and Victor Onstine (Jackie); and daughters Cindy Perez (Kevin), all of California; and Wendy MaGill (Andy) of Powell; 12 grandchildren, Justin, Drew, Jacob and Nate MaGill, of Powell; Brittany Johnson and Tyler Baker, Tyler and Ciara Perez, Mackenzie, Jack, Luke and Nick Onstine, all of California; and 10 great-grandchildren. He is also survived by brothers, Ray Onstine, Ralph Onstine (NoraLee), both of Idaho, and Freddie Onstine (Connie) of Powell; sisters-in-law, Ann Spomer of Powell and Betty Humphreys, of California; as well as many cousins who loved spending time with him and Kay.

He was preceded in death by his parents, Fred and Norma Onstine, sister Jeannine Wood, and brother-in-law William ‘Rabbit’ Wood.

Services for Eugene will take place sometime next spring.

To send flowers to the family in memory of Eugene Onstine, please visit our flower store.
Send a Sympathy Card