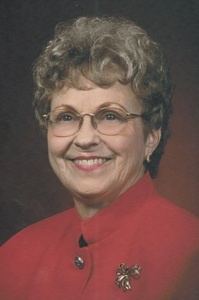 Evelyn Lucille Ellison went to be with her Lord and Savior on Sunday December 1, 2013 after complications from pneumonia at the Wyoming Medical Center in Casper. She was 81.
She was born in Emblem, Wyoming on January 22, 1932 to Martin and Ella Blank Werbelow, the 7th of 14 children. She was baptized as an infant at Zion Lutheran Church in Emblem and confirmed in the same church in 1946. She attended public school in Emblem and graduated from Greybull High School in 1952. She then went to work for Mountain Bell in Basin as a telephone operator.
On June 21st, 1953 she married Homer W. Ellison at Zion Lutheran Church in Emblem, and together they had three daughters, Annette, Diane, and Debbie. She spent the early part of her married life raising her children at home and later cleaned houses for several Worland families.
Evelyn enjoyed many simple things in life including square dancing, crafts, crocheting, sewing, quilting, working in her garden, volunteering at her daughterâ€™s classroom at Westside in Powell, and taking care of friends and family. The majority of her spare time was spent with her children and grandchildren of whom she loved dearly.
Evelyn touched the lives of many individuals and she will forever be remembered for her creativity, love of flowers, and her sense of humor.
She is preceded in death by her husband Homer Ellison; parents Martin and Ella Werbelow; brothers Frank, Melvin, and Elmer Werbelow; and sister Irma Olbricht.
She is survived by her daughters Annette Ambrosino (Bernard), Diane Hensman (Mark), and Debbie Donnell (Tim); sisters Doris Schmidt, Gladys Behneman, Luella Henderson, Jean Werbelow, and Mary Shepard; brothers Joe, George, Clarence, and  Leroy Werbelow; grandchildren Tyler and Ben Ambrosino; Heather Hensman, Scott and John Donnell, as well as many, many nieces and nephews.
Funeral services will be Saturday, December 7th at 9:00 a.m. at Immanuel Lutheran Church in Powell (223 E. 5th St.) preceded by a viewing at 8:00 a.m. Graveside services will be held in Worland after the service.
Memorial donation in Evelynâ€™s name may be made to the Immanuel Lutheran Church Building Fund.
To send flowers to the family in memory of Evelyn Lucille Ellison, please visit our flower store.