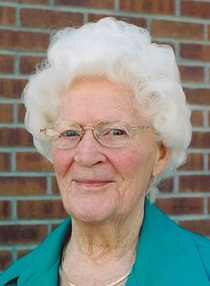 Frieda Luella Fetzer Newton 8/18/21 - 7/26/2015
The daughter of Robert E. and Arlene C. Fetzer, she was a direct descendant of the original German Salzburgers who colonized Ebernezer in 1734 on the banks of the Savannah River in South Georgia. She graduated from Marlow Consolidated High School and is a lifetime member of Zion Lutheran Church where she remained an active member until a stroke in September 1996. Although unable to attend, she remained a contributing member of Zion until her death. Luella was predeceased by her parents and three brothers - Robert E. Fetzer, Jr., J Richard Fetzer, and Leo R. Fetzer her twin.
Luella was married to Wilbur Mullen and they had one child Harriet before they divorced. Luella married Melvin C. Newton in 1951 and they were married 49 years. She worked in accounts payable office for Candler Hospital in Savannah, GA and then for Effingham Hospital in Springfield, GA for many years until she retired in 1983.
After Luella's stroke she lived with her daughter and son-in-law Harriet and Dwain Jackson in Winder, GA until they retired in 2000, then they moved to Byron, WY. Although she was a long way from her Effingham County roots she was truly amazed at the rugged beauty of her new home and always happy to see the mountains surrounding the Big Horn Basin. Frequent visits to Yellowstone National Park were her delight. When it became necessary for her to move into Powell Valley Care Center she quickly made new friends and enjoyed the many activities held at the facility as well as nice road trips. She was a joy to be around for the residents and staff, and she felt secure knowing nurses were always on duty.
Luella is survived by her daughter Harriet and grandchildren: Mark and Alane Howell of Watkinsville, GA, Gregory and Beth Howell of Hartwell, GA, Bengt and Angela Horsma of Alpharetta, GA, Brian and Nancy O'Neill of Powell, WY and Howard and Jessica Keeley of Statesboro, GA. Luella is also survived by 13 Great Grandchildren: Ryan Howell, Chris Howell, Amber Howell, Hannah Howell, Charlotta Horsma, Emma Horsma, Nicholas Horsma, SarahJean O'Neill, JuliaKay O'Neill, Fielding Keeley, Mary Georgia Keeley, Lucy Keeley and Susan Keeley. She is also survived by 2 Great Great Grandchildren: Rebekah and Luke Howell.
A memorial service will be held at Thompson Funeral Home in Powell on August 1, 2015 at 6:00pm.
Please make donations to Powell Medical Foundation, for Powell Valley Care Center in memory of Luella F Newton.
A memorial and graveside service will be at Zion Lutheran Cemetery in Georgia at a later date.

To send flowers to the family in memory of Frieda Luella Newton, please visit our flower store.