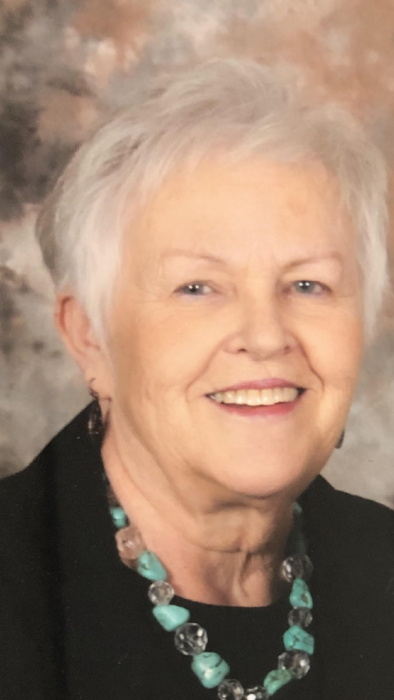 Gail was born on December 3, 1939 in Lovell, Wyoming, the oldestof three children born to Milas and Rula (Crosby) Johnson.  She is preceded in death by both her parents and her brother Michael (Wowzer) Johnson.

She attended school in Byron and was valedictorian of her graduating class (1958) and then graduated from Northwest Community College in Powell.

Gail married Wayne Gene Jones on June 19, 1959 in the Salt Lake City temple.  At the time of her death they had just celebrated their 61st wedding anniversary.  They were blessed with four children.  They lived in Laramie until Wayne graduated from the University of Wyoming, then moved to Riverton and a few years later they moved back to Byron where she worked as the secretary for the principal of Byron High School.  They settled in Powell where they raised their family and would spend the next 25 years.  After spending another 25 years in Salt Lake City for work and to care for Gail’s parents, they returned to Powell in 2016.

Gail was a loving person and will be missed by all especially her grandchildren who felt special in her presence.  She had a clever sense of humor and was known as the “White Tornado” on the CB. She loved being the life of the party and lovingly entertained all who came into her home whether it was the Powell High School Football team or the local ditch rider.  Her cinnamon rolls, dump cake, and peanut butter popcorn were her signature creations.  She loved the color purple, Shetland ponies, animals and could sew anything.

Gail was a lifetime member of the Church of Jesus-Christ of Latter-day Saints and served faithfully in many callings although most hadsomething to do with music which was an important part of her life.  She grew up singing, playing the piano and participating in family sing-a-longs.  She was the dedicated director of the Sugar & Spice Chorus in Powell and member of the Sally Bytheway Chorale in Salt Lake City. Gail never met a musical instrument that she did not like.  Piano, guitar, drums, flute, or organ she loved them all.

Services to honor Gail will be held in the 525 West 7th StreetChapel of The Church of Jesus Christ of Latter-day Saints on Saturday, July 11 at 11 a.m. The livestream will be viewable on the Thompson Funeral Home & Cremation Services on Facebook. Viewing will be Friday, July 10 at 6:00-6:45 pm at Thompsons Funeral Home and Saturday, July 11 at 10 a.m. prior to the service at the chapel. Burial will follow at the Penrose Cemetery.

To send flowers to the family in memory of Gail Jones, please visit our flower store.
Send a Sympathy Card