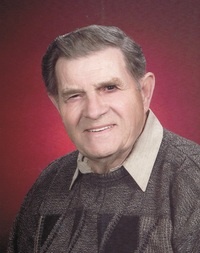 Gale Dean Kindred, born November 13, 1927 passed away peacefully on October 12, 2013 at the age of 85.  Gale was born to Fred and Alice Kindred in Watertown, South Dakota.  He graduated from high school in Lake City, Iowa in 1946.  Gale met the love of his life, Joan Schliesman, at a rival football game in high school.  They were married in St. Maryâ€™s Catholic Church in Lake City, Iowa on August 1, 1949.  They moved to Denver, Colorado in 1956.  Denver became their home and the place they would raise their two children, Timothy Josef and Gayla Joan.
Gale was a quiet, gentle man who worked hard his entire life to provide for his family.  He was a milk deliveryman, a theater usher and a warehouse forklift operator.  Through all of his professions, he taught his children to work hard and help others.  His retirement years were spent side by side with his wife as they traveled all over the United States, spending extended time in Arizona and in the mountains of Colorado.  Later in life they moved to Powell, Wyoming to be near their son.  During this time they made many new friends and were able to enjoy the many activities of their granddaughters, Sara and Lindsay.  He always enjoyed watching the Denver Broncos, talking about classic cars with his son, listening to big band music and spending time with family and friends.
Gale is survived by his son and daughter-in-law Tim and LeAnne of Powell and his three grand-children, Michael Donis of Denver, Colorado, and Sara and Lindsay Kindred of Powell.  He is also survived by his sisters-in-law Darlene Margaret Heck of Carroll, Iowa and Donna Mary Sutter of Casa Grande, Arizona and many nieces and nephews.  Gale was preceded in death by his wife, Joan, his parents, sister and brother-in-law Gloria and Henry Peters, his daughter and son-in-law, Gayla and Guy Donis and his brother-in-law Ted Sutter.
Funeral services for Gale will be held October 23, 2013 at 1:00 pm at Thompson Funeral Home in Powell.  Burial of Joan and Gale Kindred will take place at Crown Hill Cemetery following the service.  A reception will be held at Rocky Mountain Manor at 3 pm.  Memorial donations can be made in Galeâ€™s name to the Rocky Mountain Manor, 140 N. Cheyenne St., Powell, WY  82435.
To send flowers to the family in memory of Gale Dean Kindred, please visit our flower store.
Send a Sympathy Card