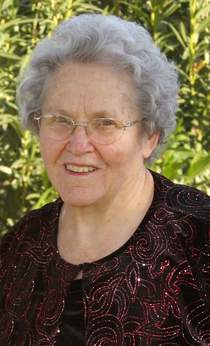 Geneva Peterson
(April 8, 1922 â€“ June 22, 2014)
Geneva Mae Peterson passed away at the Powell Valley Care Center, Sunday, June 22, 2014, at the age of 92.
Geneva was born on April 8, 1922, in Powell, WY, to Earl and Virgie (Biesemeier) Allen.  She graduated from Powell Senior High School in 1940.
On Jan. 20, 1941 she married Ralph E. Peterson in Billings, Mt.  They had seven children, two sons and five daughters. During their 57 years of marriage they resided in Cheyenne, Wapiti and Powell, WY.
Geneva was a 4-H leader for over 25 years, passing on her experience as a professional seamstress.  She was a member of BPW, Rebekahâ€™s and Rebekah Lodges Encampments, Canton and Auxiliaries.  One of the most rewarding experiences afforded her was the opportunity to be a Rebekah Chaperon for the Odd Fellows and Rebekahâ€™s United Nations Pilgrimage for Youth (western states) Bus Tour of Washington, D.C. and the United Nations in New York City, NY.  Geneva was a Rebekah Sponsor for Theta Rho Youth Organization for many years.  She was a lifetime member of the Presbyterian Church where she witnessed her childrenâ€™s marriages and grandchildrenâ€™s baptisms.
Her love of painting led her to opening her own ceramic shop in the early 70â€™s where she expressed her artistic talent creating award winning objects.  She shared her talent for her craft providing classes to anyone interested in the art of ceramics.
The greatest joy of Genevaâ€™s life was her children, grandchildren and great-grandchildren.  She was proud of each of their accomplishments and was greatly surprised to realize at her 90th birthday how large her family had grown and how diverse their talents were.
Our Mother wanted to thank all of her family and friends for the experiences she shared with each of you.  Your encounter truly enriched her life and brought her great joy.
Geneva was preceded in death by her parents, Earl and Virgie Allen, brothers Carl and James Allen, sister Lois Purvis, husband Ralph Peterson and son Richard Peterson.
She is survived by son Robert (Terry) Peterson (Woodland, CA), daughters Marjorie (Timothy) Cruz (Powell, WY), Dorothy (Gary) Fulton (Powell, WY), Kathy (William) Unterzuber (Salinas, CA), Joyce (Richard) Abbott (Stafford, VA) and Cyndie Quinn (Powell, WY).  Eleven grandchildren and twenty three great-grandchildren.  Two sisters, Leona Link (California), Zona Gail (Bert) Christensen (Florida), seven nieces, seven nephews and several great-nieces and great-nephews.
Cremation has taken place and memorial service will be held July 22, 2014 at 10:00 a.m. at the Union Presbyterian Church in Powell, WY.  Memorials may be sent to the Union Presbyterian Church, 329 N. Bent Str., Powell, WY  82435, http://unionpresbyterian.org.  Thompson Funeral Home is in charge of the arrangements, P.O. Box 807, Powell, WY  82435, www.thompsonfuneral.net.

To send flowers to the family in memory of Geneva Mae Peterson, please visit our flower store.