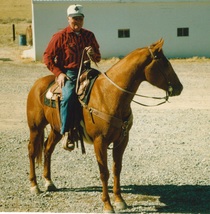 George â€œTomâ€ Glatter died Dec. 9, 2015, at the Powell Valley Care Center. He was 83.
Tom was born in Stromburg, Nebraska, on July 30, 1932, to Matt and Marie Glatter. He was the third born of four siblings, Phyllis Nicolas (Joe) of Columbus, Nebraska, Wallce Glatter, deceased, and Dick Glatter, deceased.
He graduated from high school in Shelby, Nebraska, and later joined the Navy. He served for four and one-half years during the Korean War. Tom spent a lot of that time on a destroyer escort, the USS Hanna. He was discharged in October 1955, and after briefly returning to Nebraska, he moved to Casper, where he met and married Joanne R. Geiger in October 1957.
Together they had three children, Rick Thomas, deceased, Kimberly (Bill) Sheets of Cody and Debra (Coy) Churchill of Powell.
The couple moved from the Casper area to the Cody and Powell area in 1964, where they resided until Tomâ€™s death.
Tom was always very active and busy. He loved the mountains and hunting, but most important were always his horses and mules. Tom and Joanne owned and operated Pineco Tree Service in the Heart Mountain area until September 2015(?). He was admitted into the Powell Valley Care Center on Dec. 30, 2014, where he resided until his death on Dec. 9.
Tom will be missed by all of his friends and relatives in Nebraska, and by his friends and family in Wyoming.
Due to his wishes, he has been cremated and no services are planned at this time. His loved ones hope he rests in peace.
Thompson Funeral Home assisted the family with funeral arrangements. Condolences may be sent to the family at www.thompsonfuneral.net or to P.O. Box 807 Powell, WY, 82435.
To send flowers to the family in memory of George "Tom" Glatter, please visit our flower store.
Send a Sympathy Card