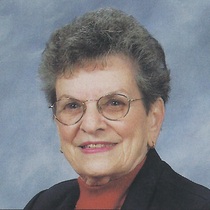 Gwendolyn F. Baxter
Gwen was born November 23, 1921 to Harry G. and Harriet L. (Fogg) Jacobs on a farm east of Daykin, Nebraska. She was the third of seven children. She passed away January 19, 2015 at the Powell Valley Care Center at the age of 93.
She graduated from high school in Western, Nebraska, with the class of 1938. Gwen taught school in rural Salina County, Nebraska, for three years.
She came to Powell.. Wyoming, in her little, red coupe, to join her family in May, 1941. Gwen married LaVerne Baxter July 18, 1942. They had, two children, Gary and Linda, both born in Powell. When Gwen first married Vern, he was serving in the Army-Air Force, and stationed in several southern states. Gwen returned to Powell when Vern was transferred to Italy during WWII. After his service, they enjoyed camping, especially on the North Fork. They also enjoyed traveling around the country in their RV. They took cruises, and traveled outside the United States to several countries.
Gwen was a member of Presbyterian Church, and served as a deacon, Sunday school teacher and she and Vern sang in the choir for many years. She was a fifty plus member of American Legion Auxiliary and Past Presidents Parley. She also hosted many Friendship Bible coffees in her home. She was an excellent seamstress, enjoyed crocheting and embroidering and shared her beautiful creations with many. She celebrated her 80th birthday with a hot air balloon ride in Billings. Gwen worked in downtown Powell for many years at the Safeway Store, Bonners Variety, Eddie's Shoe Store and Hunnicutt Jewelry.
Gwen volunteered for many years at the Powell Health Care Center in the beauty shop, playing piano for the patient's enjoyments and filling in wherever needed.
She was known as "Grandma B" to her grandchildren, great grandchildren and the neighborhood children on North Clark Street, where she and Vern resided for almost 50 years. Her great grandchildren were a special joy to her.
As a widow, she lived at Heritage Park for several years and for a short time at Rocky Mountain Manor before entering the Care Center.
Gwen was preceded in death by her husband, Vern, parents, brothers, Kermit and Jewell (Jake) Jacobs, sister, Belle Jones and grandson Shannon Ray Baxter.
She is survived by her two children, Gary (Patricia) Baxter, of Powell, Linda (Jeff) George, of Fort Collins, sisters Patricia Jones and Barbara (Clarence) Werbelow, of Powell, brother, Larry (Carol) Jacobs, of Medford, Oregon, sister-in-law, Oma Jacobs, of Powell, ten grandchildren, twenty-nine great grandchildren and three great, great grandchildren.
Cremation has taken place per her wishes and a memorial service to celebrate Gwen's life will be held at Union Presbyterian Church in Powell on Friday, January 23, at 10 a.m.
Thompson Funeral Home is in charge of arrangements and condolences may be sent to the family at www.thompsonfuneral.net or P.O. Box 807, Powell, WY 82435.
To send flowers to the family in memory of Gwendoyln F Baxter, please visit our flower store.