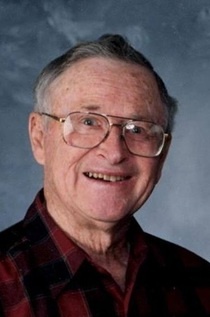 Harley Bright, homesteader, farmer and elementary school teacher died, Wednesday, March 23rd peacefully at his home with his wife, Alice, of 65 years by his side and holding his hand. He was 95.

Harley was born Oct. 22, 1920, in western Nebraska, the oldest of four children born to Walter and Sadie Bright. He attended the Liberty school, near Morrill, Nebraska, near his parents' farm in the Dutch Flats area.

After graduating from high school in 1939, he moved with his family to Ridgway, Colo., where he ranched with his parents, until enlisting in the Army Signal Corps in October, 1942. He trained in Trinidad and Craig, Colo., and in August of 1943 was called to active duty near Sacramento. In January of 1944 he was sent overseas and became a member of the 25th Tropic Lightning Infantry Division, and was assigned to Auckland, New Zealand. From there he was assigned to the Philippines and then to Nagoya, Japan, for occupation duty. Harley, now a master sergeant, was discharged in Denver, Colo., in January of 1946. He ranched in Colorado for three years. As a veteran, he was eligible to put his name into a drawing for homestead land between Powell and Cody. His name was drawn, and in 1949 he became the owner of 115 acres of level sagebrush ground in Wyoming. Harley and Alice were married Nov. 4, 1950 in Glenwood Springs, Colorado, and they moved to the homestead to begin their life together. Harley also taught 4th and 5th grade in the Powell schools from 1968 to 1983 while continuing to farm. They sold their homestead to a son and his wife, Gary and Sharon and Harley and Alice moved to town in 1995.


Harley is survived by his wife Alice, two sons, Duane (Mik) of Sheridan, Wyoming, Gary (Sharon) of Powell, a daughter, Donna, of Great Falls, Montana, and four grandchildren, Cassandra (Ethan) of Bath, Maine, Racheal, Laura, and David, all of Powell. He was preceded in death by his parents, sisters June and Bonnie, and brother Carroll.
A rosary service will be held at 6:30 p.m. Thursday, March 31, at Thompson Funeral Home. Funeral Mass will be at St. Barbaraâ€™s Catholic Church on Friday, April 1, at 2 p.m., followed by interment at Crown Hill Cemetery.
To send flowers to the family in memory of Harley Lawrence Bright, please visit our flower store.